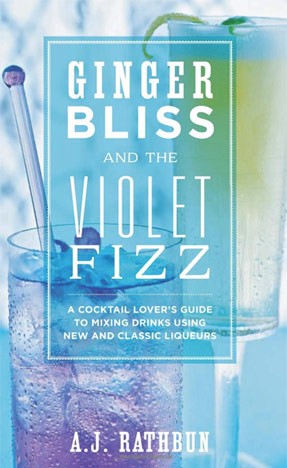 Mixologist, raconteur, and author A. J. Rathbun returns with the newest addition to his spirits collection. Following in the tradition of his previous cocktail books, Ginger Bliss and the Violet Fizz features 200 recipes that demystify all manner of liquors and liqueurs, focusing both on the drinks of old, made popular during the early twentieth century, as well as on more contemporary concoctions. Like a good gathering, the book includes a mix of lively, vivacious stories and sidebars along with serious cocktail knowledge that will appeal to newly minted mixologists as well as to seasoned pros. Chapters are organized by flavor profile and cover citrus, floral, fruity, herbal, nutty, spicy, sweet, and vermouth-based. This hybrid approach to old and new includes a breadth of information and recipes not typically found in modern cocktail books, with historical cocktail appeal that’s fun to read.

This drink, according to legend, was created by Frank Fogarty during Prohibition. Not a bartender, Mr. Fogarty was “the Dublin Mistral,”
one of the tip-top monologists in vaudeville. According to Brett Page’s Writing for Vaudeville (re-released by General Books, 2010),
in his act Mr. Fogarty “often opens with a song and usually ends his offering with a serious heart-throb recitation.” This set up matches the
drink itself (if you can stretch the stage a bit), with the drink starting with the gin’s song, moving through the maraschino and Chartreuse
acts, and ending with the heart-throbbing tang of fresh lime. The most recent last word on this delightfully balanced cocktail, though, is a
large rise in popularity, as it’s showing up on stages (or bars) from east to west to north to south. This new reciting of the word is due to
the legendary bartender Murray Stenson from Seattle’s Zig Zag Café, who re-discovered the Last Word and put it on the Zig Zag menu, to much applause.

Fill a cocktail shaker halfway full with ice cubes. Add the gin, maraschino, Chartreuse, and lime juice. Shake well.
Strain into a cocktail glass and drink without another syllable spoken.

A note: Fogarty was also elected president of the White Rats, the vaudeville union, in 1914. Which sounds like a much
more dubious pleasure than being president of the Last Word drinking club.