What I’m Drinking: The Tennessee Colonel with Bib & Tucker Bourbon

Not too long ago in the scheme of things (depending on your scheme!), I was lucky enough to receive a bottle of Bib & Tucker bourbon (along with some swell glasses and such – it was a very lucky day!). Coming in one of the more memorable bottles I’ve seen in some time – lovely glass shape and glass lettering and overall aesthetic set up – Bib & Tucker isn’t just a pretty package. Made in Tennessee in a hearkening to the 1880s as they say, the time of “boldness and refinement,” it’s a bourbon aged 6 years in low char white oak barrels (there are some older siblings, too, on the years-aged front) and has won a fair amount of awards. Deservedly so, me thinks, as it’s very smooth, very drinkable. Starting with a nose of vanilla, caramel, and spices of the pastry variety, it flows into a vanilla, cinnamon, spice flavor, with a hint of nuttiness, pecan style, and then finishes with a little oaky caramel spice-ness. Made from 70% corn, 26% rye, and 4% malted barley, it’s a swell number to sip solo, with or without a cube of ice.

However (as you might have guessed!), it’s also a really fine base for cocktails in my humble opinion, as the people say. If going the mixing route, I’d suggest a recipe that lets the bourbon shine, with only one or two other liquid pals along for the ride. Which is what we’re doing here, in the way of the classic Kentucky Colonel cocktail, which I was reminded of when browsing the old The Art of Mixing Drinks, 1961 edition (not to be confused with the also venerable and perhaps more well-known The Fine Art of Mixing Drinks. The lack of “Fine” volume I have comes in a little box, with plastic cover and ring binding, and is fun if you can find it). We’re altering the title a bit here, cause our Bib & Tucker is from TN not KY, but keeping the basic combo of bourbon and monastic herbal liqueur Bénédictine. You see this cocktail with various ratios of our two players, and with the addition of bitters (a good plan, though not used here as this book’s recipe didn’t have it and I wanted to pay homage properly), served up instead of with a big cube (but the big cube felt ideal) and with different twists – I’ll admit, at first the lemon felt off, but its bright citrus notes worked a treat above the bourbon and liqueur intertwining flavors. Delicious. 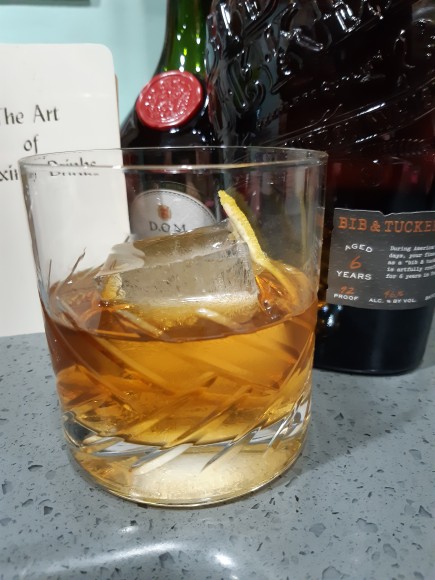 2. Add a large ice cube or a few smaller ones to an Old Fashioned or comparable glass. Strain the mix in. Garnish with the lemon twist.