What I’m Drinking: The Better Days

Recently, I ended up with a bottle of Brancamenta via the post. Yeah, I have a good life. I did feel sort-of bad about it. See, it was part of the Brancamenta Mint Challenge (#brancamenta), where the fine folks at Fratelli Branca (perhaps best known for Brancamenta’s sibling Fernet Branca – hey, why not read about my Branca tour) send around some bottles to folks who like to make up drinks – like me! – and then we cut loose and see what happens. None of that was bad, however. The bad part was that after the bottle showed, I realized I already had a bottle of Brancamenta on the shelf. But, I suppose, as Shakespeare said, you can never have too much of a good thing.

And I did come up with not one, but two swell drinks using the minty-herbally-goodness that is Brancamenta. I’ll post the second one later, but first The Better Days cocktail. When I heard “challenge” I took it a little literally, and challenged myself to make a drink that would make people say “what, that can’t be right” when they saw the ingredients list, but then say “jump back! that is awesome,” when they took the first sip. I also wanted to keep the ingredients list slim, as a secondary challenge for myself. And have a drink that you could have early in the day. And yes, I managed to deliver on all three, if I can be so bold, cause The Better Days is tasty, good before noon, and deceptively simple. 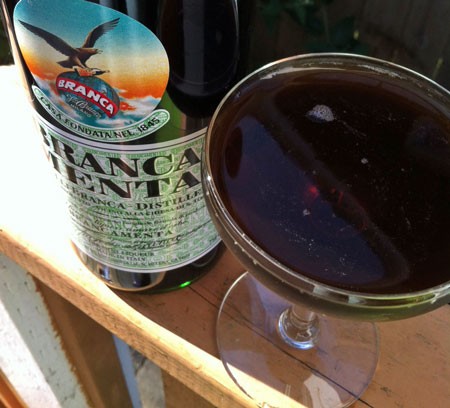