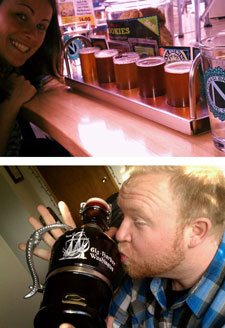 Last summer I decided to add some of my favorite breweries to my West coast camping road trip. My squeeze and I were leaving Seattle and headed south to see what we could see as well as drink what we could drink. Collectively visiting Elysian, Hales, Fremont, 7 Seas, Silver City, and Pyramid Brewing in a two month stretch,  we became determined to see how many different breweries we could conquer. We plotted a map that navigated us past some well-known camping areas and brew pubs. One last pint at Maritime then we filled our growlers and headed south. We drove through Oregon tasting Ninkasi, Deschutes, and Rogue beers. From there we conquered many of the fine ales California has to offer from 21st Amendment, Russian River, Anchor Steam, Magnolia, and North Coast breweries. It is fun to see and taste the different styles and varieties of a region. Every brewery had its flagships and standouts from fresh hops to aged in barrels, simple solutions, and complex concoctions. This brew tour has now become a past time of mine and a must when I visit new cities. I like to experience a place through food and drink rather than your typical site seeing. What better way to experience a new town than eating and drinking with the locals? Beer people open their doors and soon their conversation to you. A few pints in and you have access to the past, present, and future. You also get the true feeling of a place. There is a certain passion in craft beer from the brew master who is often perched at the bar to the consumers sat all around you. Hunter S. Thompson said, “Good people drink good beer, no shit. Just look around any public barroom and you will see: Bad people drink bad beer. Think about it.” I formed bonds sipping suds in different villages from East to West. This year I have experienced tastings in New York, New Jersey, Philadelphia, and Chicago. And as I continue to visit breweries and taste their fare I will share, best I can through the internet anyway. Suggestions welcome.

I vote for Drew’s brews to go international, maybe next summer around August.

I think some prep work is in order. Brew Dog, Samuel Smith’s, Meantime, we can get most of those over here.

« Get Yourself to Woodinville on Saturday, May 19th | Wine Cocktails and the Savvy Lush »