It was recently my mother’s 75th birthday (yay mom!), and she had quite the wing-ding to celebrate, with oodles of friends and family in attendance, and lots of delicious edibles, and some piano playing, and some singing, and some toasting. I also made drinks for everyone, and we went with a little Italian-styled, or at least Italian-touched, menu of three drinks. One of those was the Portofino, a drink I hadn’t had since putting together the recipes for Ginger Bliss and the Violet Fizz. It ended up being the favorite of the evening, I think because, well, it’s a tasty drink, sure, but also because it’s such a fine, fine bubbly beauty for August, when the weather is hot. The Italian part of the drink comes out in the name (which is a small port city in Genoa), as well as the addition of Italian aperitif champion Aperol. The neat thing – I believe – is that the drink also has a dose of Pimm’s No. 1 Cup in it. That’s not only neat because it references the days when English sailors used to dock in the port city the drink’s named after, but also because the day before my mom’s 75th birthday party, I returned from a two-week sojourn in jolly old England, where Pimm’s, of course, is from. 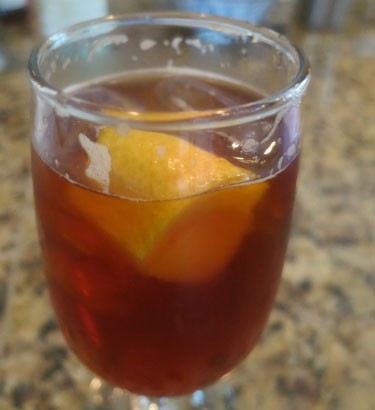