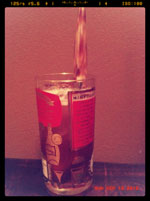 « Cocktail Talk: Lovers of Their Time and Other Stories | What I’m Drinking: Sweet Bird »