I was browsing the small-but-swell Standard Cocktail Guide from Crosby Gaige today, and read this, “In this year of 1944 it behooves the prudent mixer to know his rums. Good whiskey is now scarce and will be scarcer for some time to come while good rum is in plentiful supply.” First off: glad we have so many plentiful options of both rums and whiskey (and other delights) today! Secondly, it still behooves the prudent mixer to know and love rum. Thirdly, I found a delightful little recipe in this Rum section of this delightful little book, one I can’t remember if I’d made before, called The Frank Morgan. So, I wanted to make it again, even though I’m not sure which Frank Morgan it’s named after – though I think it’s the early 19th century actor. Let’s say that!

Anywho, the drink is deceptively simple: rum, sherry, Angostura bitters. But with that simplicity, the rum must be one – it behooves the drink – that really shines. Lucky for me, I recently received a bottle of Bacardi Gran Reserva Especial dark rum in the mail (don’t hate me, be happy for me!). Admittedly, this is a really fine, fine rum, and one that in most situations you’d want to sip solo. I mean, it’s a limited-edition number, aged a minimum of 16 years (!) in American white oak in the Caribbean. You’ll find stone fruits, caramel, a little island forest, and more unveiling as you sip, and an overall lushness that can’t be beat. So, sip solo for sure. But, you know me (right?), I had to try it in a cocktail, too, and this one is ideal, cause the rum really does shine, with just a few other players. Starting with the sherry side, where I went with Williams & Humbert Dry Sack Medium sherry, which has a nice nutty and spice notioning that matched well. Add old pal Angostura, and here we are. Well, almost! Though it’s not in the original recipe from the esteemed (from whatever afterlife bar he’s at) Mr. Gaige, I added a small orange twist. And that burst of citrus was a treat. Both he and Mr. Morgan would approve, I believe. 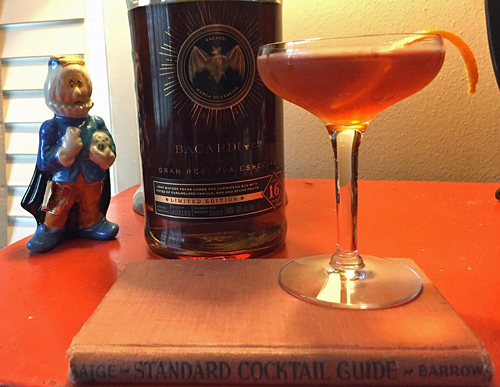 1. Fill a cocktail shaker or mixing glass halfway full with cracked ice. Add all but the twist. Stir well.

2. Strain into a cocktail glass. Garnish with the twist. Sip, and think about 1944 – and about the bounties in your local liquor store.

« Learn About Wonderful Washington State Digestifs with Me and New Day Northwest | Cocktail Talk: I Shot the Buddha »