What I’m Drinking: The End Most Sweet

Decided to end the month with one more non-alcoholic delight, in honor of those taking part in the now-annual booze-skipping known as dry January. This drink’ll be like the dessert at the end of the month’s n/a meal, as it’s a rich charmingly chocolate treat, one that has enough tang to balance all that lush loveliness out. In a way, it’s based on the canonical creamy cocktail classic (a favorite of mine!) called the Alexander, which also features a trio in equal parts, one of which there and here is cream. In the Alexander, the other two are gin and cream de cacao, whereas here we have orange juice and chocolate syrup. It’s a drink that demands some good solid shaking to get the combination mix level you want, and to keep that sweetness smooth and make the mix mighty fine. 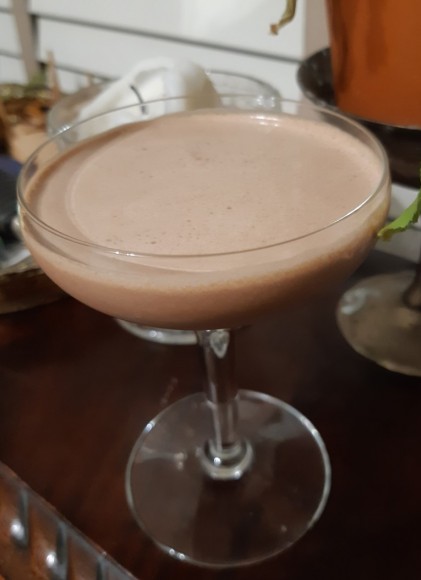 The End Most Sweet

2. Strain (though a fine strainer if you’re worried about pulp) into a cocktail glass, and garnish with the peppermint stick, if you want. I go a little back-and-forth, as sometimes that hit of peppermint is perfect, and some days I’m just not feeling it. You see how you feel, and go forth sweetly.