I started (after the predictable intro note) another round of Charles Dickens Cocktail Talks from Our Mutual Friend just a skip or two ago, so be sure you read Part I. Now is good! Okay, back? You have the set up? And are ready for this next quote? Good! It’s perhaps the very first Cocktail Talk to mention shrub, the vinegar-y mixer that’s made a comeback (like so many things) during the recent cocktail renaissance. Here, interestingly, it’s served warm to one of the novels many heroines-of-sorts (at least I think she could), in the Six Jolly Fellowship Porters, one of the many amazing bars that show up in Dickens.

“But first of all,” said Miss Abbey, “– did you ever taste shrub, child?”
Miss Wren shook her head.
“Should you like to?”
“Should if it’s good,” returned Miss Wren.
“You shall try. And, if you find it good, I’ll mix some for you with hot water. Put your poor little feet on the fender. It’s a cold, cold night, and the fog clings so.” As Miss Abbey helped her to turn her chair, her loosened bonnet dropped on the floor. “Why, what lovely hair!” cried Miss Abbey. “And enough to make wigs for all the dolls in the world. What a quantity!”
“Call THAT a quantity?” returned Miss Wren. “Poof! What do you say to the rest of it?” As she spoke, she untied a band, and the golden stream fell over herself and over the chair, and flowed down to the ground. Miss Abbey’s admiration seemed to increase her perplexity. She beckoned the Jew towards her, as she reached down the shrub-bottle from its niche, and whispered:
“Child, or woman?”
“Child in years,” was the answer; “woman in self-reliance and trial.”
“You are talking about Me, good people,” thought Miss Jenny, sitting in her golden bower, warming her feet. “I can’t hear what you say, but I know your tricks and your manners!”
The shrub, when tasted from a spoon, perfectly harmonizing with Miss Jenny’s palate, a judicious amount was mixed by Miss Potterson’s skillful hands, whereof Riah too partook. After this preliminary, Miss Abbey read the document; and, as often as she raised her eyebrows in so doing, the watchful Miss Jenny accompanied the action with an expressive and emphatic sip of the shrub and water. 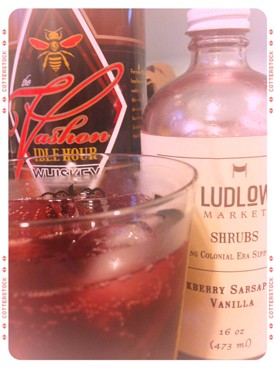