What I’m Drinking: The Last Gasp of Summer

It’s only fitting to have legendary Italian favorite Campari as a core ingredient in a drink that’s all about love for those days, sometimes in September, sometimes in October, which bring a more summery-ness to fall – extra sun, an extra digit or two on the temperature, or just that feeling summer has. Why Campari? Well, Campari, if you didn’t know, is all about love. Created in the 1800s in Italy by Gaspare Campari, at first Campari was only available throughout Italy, where it became very popular. Then, Gaspare’s son Davide was born, grew up, grew to love the liqueur named after his family, and starting working at their café, the Café Campari in Milan, where he spread the legend of the liqueur. One day, when the stars where shining through the bottles filled with red in the shop, Lina Cavalieri walked through the doors. Lina was a popular opera singer, and she and Davide got along smashingly, and they started to become more than friends, if you know what I mean. Then Lina had to move to Nice, France, for an opera part. Davide was crushed, but had a light bulb moment – why not begin exporting Campari, starting with Nice? Then he would be able to bring the liqueur to those in need around the world, and also be near his lady love. That, friends, is a summer-y story, and this is a summer-y drink that’s ideal for fall (or anytime, really). 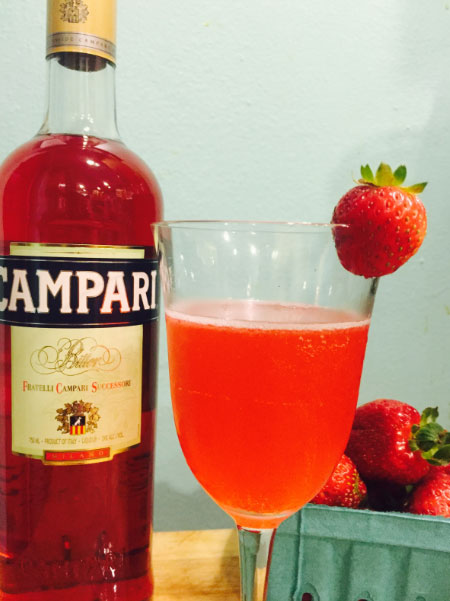 The Last Gasp of Summer

1. Add 3 of your strawberries and simple syrup to a cocktail shaker. Muddle well, but carefully.

3. Strain through a fine strainer into an enchantingly summerlike goblet. Top with the Prosecco. Garnish with that last strawberry (put a little slice into it, so it fits cozily on the rim).

Hey, check me out on Fox 25 Boston, talking Wine Cocktails with my pal Gene and making up Maibowles for some early morning drinking (and while checking out the fun, well, hopefully fun, stuff you should know that I had just flown into Boston the night before, and my flight was late, and, even though it was a “direct” flight from Seattle to Boston we had a layover in Philly, and they managed to lose my luggage–though I was always on the same plane–and so I was wearing the same clothes from flying the day before, which means I was in shorts and smelled a bit, and had to use a different shaker and all that cause my bar tools were in my luggage, and well, I know I’m complaining, but I also know you want the backstory, and so you’re getting it, but what I really want to say is, “damn you US Airways, how can you stink so much?” I did end up having lots of fun on the TeeVee though, and hopefully didn’t look too sleepy):

The Maibowle’s genius, too, and you should have one this weekend, with mom, who will love it, or just with yourself. And then, come back next week for Italy, Part III: This Time It’s Countryside.