What I’m Drinking: Sir Teddy’s Tonic with Aperol and with Blanc Vermouth

It’s a swell age for tonics. Heck, we have at least two good ones made here in Seattle (Bradley’s and & Tonic), both being tonic syrups you then add (usually) soda too, along with your spirits and such. There are also a number of worthy bubbly pre-bottled tonics – though be sure to give these non-pre-bubbled tonics a try, as they bring loads of flavor. With all the tonics, I’ve been drinking a lot of gin and tonics, as you might expect, and other things, like Sherry & Tonic. Recently, thanks to all-star pals Jon and Nicole, I tried another new tonic, Sir Teddy’s, from Wilks & Wilson out of Indianapolis (which, funny enough, is where Jon and Nicole are from), a company that calls themselves “purveyors of fine elixirs.”

In this case, at least, the product completely lives up to the billing. But I didn’t know this at first, cause you can’t believe everything you read, so I had to, you know, try it! I was going to go just straight G&T, but in the interest of being interesting, I decided why not try some other items and this tonic? And it was a good decision! The day was sunny, the mood was experimental, the time was in the aperitivo hours, and so I went with classic Italian aperitif Aperol (which I’m guessing everyone has had, but if not, it’s like Campari’s younger sister, meaning a hint bitter, but more citrus and a smidge sweet), and blanc vermouth. In this case, La Quintinye Vermouth Royal blanc, which is a light, herbal, scrumptious vermouth ideal for sunny days.

And then Sir Teddy’s of course, which has a swell taste – the quinine you’d expect, plus lime, spices, and a nice bitter current from gentian – and really a swell story. Turns out (as this legend goes – by the way, kudos to Wilks & Wilson for the stories, really good stuff) Sir Teddy after having a life at sea was known as the “Gentleman of the Night” as he doled out his famous tonic on the street of NYC. But go read the whole Sir Teddy story as you’re sipping one of the below. Both came out wonderfully. Each had its own personality, but I can’t say which I liked better. Luckily, you can make each and then make up your own mind. I’m just going to have to do more testing. 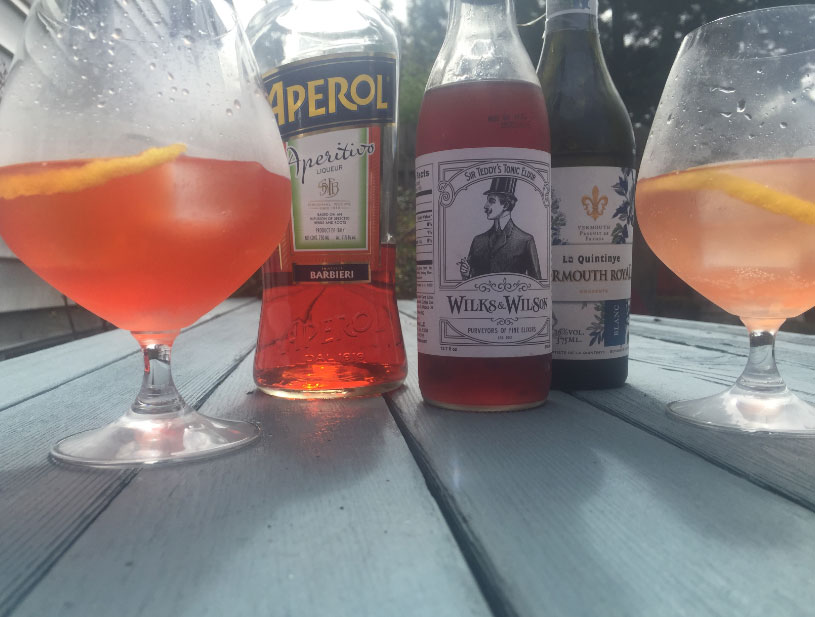 1. Add the Sir Teddy’s and your Aperol or vermouth to a brandy snifter (or highball, as the case may be). Stir briefly.

2. Add a goodly amount of ice to the glass. Top with the club soda. Stir well, but carefully.

3. Garnish with the twist. Drink. Then make whichever you didn’t make the first time.