What I’m Drinking: The Fat Fisherman

I feel bad for not being much of a fisherman. Well, not usually that bad, but when I come across a bottle of one of The Fat Trout Scotches, which have fish on the bottles and which are a line of “sportsman’s Scotches,” then I feel a little bad. Until I realize there’s no need for actually going to the trouble of fishing (I realize, fishing folk, that for many it’s no trouble at all – good for you, if you’re one of them), and that I can enjoy the Scotch and just tell fish stories. One time, I caught this great white shark . . .

Anywho, a bottle of the Fat Trout blended Scotch (there are also Lowland and Speyside single malt versions) showed up the other day, and led to all this fish musing. It’s a tasty blend, too, with hints of smoke and spice and grain all mingling together. A fine thing to have neat or on the rocks. But also a fine thing when put into a drink with other items. Example A: The Fat Fisherman. To follow up a fall theme (it being fall and all), I mixed the Fat Trout with a cider, Tieton’s Dry Hopped cider (from here in WA) to be exact, which is a fine fall drink. But it was missing something . . . until I added a healthy dollop of Yzaguirre red vermouth, a type of what most would think of as sweet vermouth. Coming from Spain, this vermouth has a snazzy herbalness and a dash of balsamic flavor that went perfectly with the Scotch and cider. 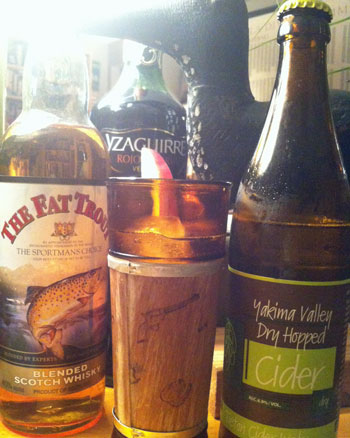 1. Add the Scotch and vermouth to a highball or comparable glass. Stir briefly.

2. Fill the glass three-quarters up with ice cubes. Add the cider. Stir, carefully, working to bring the bottom stuff to the top and vice versa.

3. Garnish with the apple slice. Talk about fish.