Whew, I’m all a’flutter. I’m trying to wrap up a million projects, teach my dogs to talk, not throw water balloons at my co-workers, invest in a few more ionic salt lamps to bump my negative ions up, put the soon-to-be-here Dark Spirits out of mind so I don’t get too bubbly about it, and keep my fragile mind in order so I can leave for lovely San Francisco in just a day and half. Which means I’ll probably post even less than the little I do this week (though who know), as I’ll be visiting with the radly-named drinks writer Camper English (check out his blog Alcademics right now!) over drinks, stopping in to hang out with Meredith and the fine folks from Chow over drinks (and have a drink with pal Michael, sometimes known as Mr. Meredith), visiting Matthew at the Clock Bar with wife Nat and having some drinks, and then sleeping. Now, you can see why I’m a’flutter. Why you’re a’flutter is because this picture of the almighty Mai Tai is so darn pretty you might just fall over: 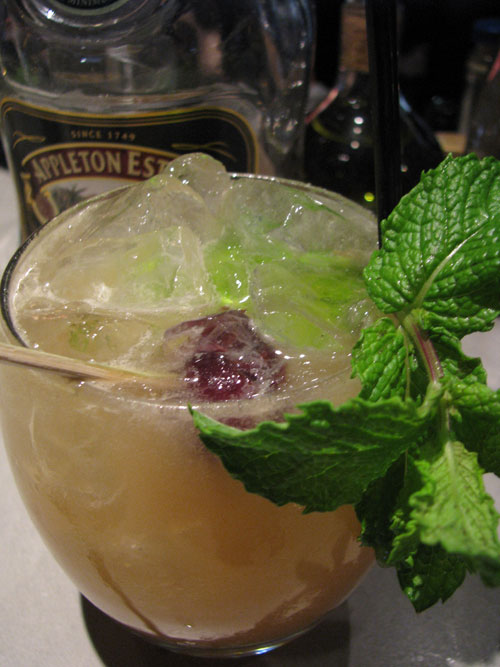 It was made by Evan Martin at Naga and it was scumpdeliyciousness. That’s what I’m calling it. You should have one, and soon, as they make the summer even better. I’ll be sure to think of you when leaving my wallet’s contents and parts of my liver in San Francisco, and you be sure to think of me when you have your Mai Tai, and then the harmonic convergence of all this thinking and drinking will usher in a new boozy state of being. Just watch and see.