I swear, this has to be a drink already, with another name. It’s very classically minded, and an obvious relative to drinks such as that which will not be named (but which ends in “tini”). It does use rose’ vermouth, which isn’t as readily available in the U.S. as one would hope (as you might expect, it’s neither as dry as French vermouth or as herbal as Italian vermouth, or dry and sweet vermouth respectively, and light on the tongue like its namesake wine), so it might not yet be named. However, rose’ vermouth has been available then and now, maybe moreso then, even, so some variation of this (maybe with a different bitters, since the Bitter Truth, even with their classical leanings, haven’t been around that long) seems like it has to have been around. I’d check the library, but the library is in Seattle and I’m in the Italy. Some bartender or bar writer out there will, I’m sure correct me. But until then, I’m going with Da Molto Tempo, and having it lots: 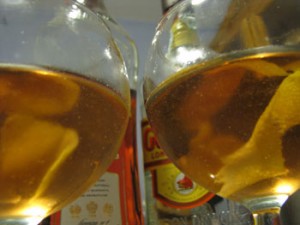 PS: For those inquisitive ones: it means “a long time ago.”

« Cocktail Talk: A Rage in Harlem | Hey, Get Your Seattle Magazine (with me) Now! »