You Can Still Help Hella Bitter—But Do It Soon 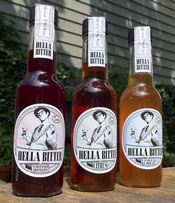 First and foremostly, let me say that I have never met the folks at Hella Bitter. Heck, I’ve never even tasted Hella Bitter bitters. I have had a fella tell me they were fine folks. But it’s a fella I’ve never even met face-to-face! So, I feel I’m completely un-biased here, and you cann’t shake your head at me and disagree (about this. Other things? For sure). But here’s the skinny: Hella Bitter is a little bitters company in Brooklyn, and they want to open a bitters-and-soda cart to roam the streets of NY making everyone’s life better. Doesn’t that sound awesome? A bitters-and-soda cart? I wish it was an idea for Seattle, but as I just think the world would be a better place with said cart, I’m urging you donate to their Kickstarter campaign. You can go right here and learn more about the Hella Bitter cart campaign. If you live in Brooklyn and haven’t already donated, then I think it’s a must. So, quit reading and start donating, because you only have 48 more hours to help.