Editor’s Note: Somehow, the Spiked Punch HQ was broken in to recently, and the whole staff was taken hostage by a thirsty beer-monger named Drew. He wasn’t looking for money, but did demand I let him write about beer on the site. Beer? I like beer! Really, not such a rough demand. The fact that Drew (Webster) knows a heaping hop-full about the beer, and writes in a way that will make you want to drink more (which is another thing Spiked Punch is all about) made relinkuishing some posts easy. And yes, I said “posts,” as the plan is for him to stop by to talk the beer with some regularity. So c’mon back. 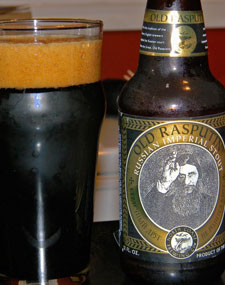 My good friend and drinking companion A.J. Rathbun has decided to allow me a forum to vent my love of my drink of choice. Drew’s Brew will be a blog feature for beer news, drinking locations, beer reviews, and events. It may not be as glamorous or elegant as some of A.J.’s fine cocktails but beer has grown up a lot since the days of mass produced gallons of watered down knock off Pilsners and Lagers drowned this country in bland mediocre beverages.

Homebrew, craft breweries, and micro brews are growing faster than ever and we, the people, benefit. I want this blog to speak to you, for you, and with you, beer lover. Let your voice be heard! Post comments and leave suggestions and responses to the beers we discuss. Beer is truly the drink of the people (Editor’s Note: Drew does not speak for the editor). People love to drink cocktails and wine but unless they are well versed in mixology or have earned their Sommelier accreditation they are hesitant to tell you what they enjoy and why. Beer drinkers will happily tell you what they love to drink and why. Everyone’s opinion is valid in beer tasting, if you don’t believe me just go to Rate Beer where anyone can sign in and rate a store, beer or brewery based on their experience and pallet.

We are so fortunate to have so many great beers at our fingertips in the great Pacific Northwest. Because of this, I will offer up local digs in Seattle, but also (when I’m on the road) other locales, to point you toward bottle stores, breweries, or eateries with great taps. But I also want to hear your voice. And, in true Spiked Punch fashion, I will also include what I am drinking. A.J. turned me on to one of his favs, Hilliard’s, earlier this month but tonight I am in the mood for an “old reliable,” one of my all-time favorites: Old Rasputin. I enjoy this beer so much I stopped by the North Coast Brewery where it’s made in Fort Bragg, California on my road trip back from Big Sur last summer. Tucked in a sleepy coastal town outside Mendacino, this brewery makes some of best beers you have never heard of. Old Rasputin is an Imperial Stout that drinks smooth. It has a roasted malty flavor with hints of chocolate and coffee hidden in the aroma that rises into your nose as you take that first sip, breaking the surface tension that separates the dark black liquid and the tan creamy foam that sits thick on top. There is a great balance between sweet and bitterness in this complex but smooth sipping beer. A must try for anyone who loves a tasty stout on a cold dark night. You can find it at most quality bottle stores—in the Seattle area, for example, you can pick it up at Bottleworks in Wallingford, Beer Junction in West Seattle, or my favorite, Chuck’s on 85th (in the N. Ballard area).

Great post, Drew! We actually serve Old Rasputin at Roxy’s Backdoor in Fremont (and for a good price, I might add).

I got thirsty just reading this! Nice job Drew. Looking forward to more of your postings and taste-testing with you on this glorious b-day weekend we have coming up.

Sounds like a winning combination, Drew, but I’ll have to wait until it gets cold again to put me back in the stout drinking mood.

Is this coming from 20 something Drew or 30 yr old drew. They say tastes change with age. Great post my man. I look forward to helping you sort through all of these. And a great choice for a first post! now i want one and it’s 6:30 in the morning… well done sir

I guess as of today, it’s the 30 yr old Drew. Which is a backhanded h-bday.

Great article Drew! I love me some Stouts and Old Rasputin sounds lish! My brother is a home-brewer and I will pass on this article.

Good work Drew! I dig the Old Rasputin myself. I’ve got to get you some of my homebrewed concoctions.

Look at the head on that thing! What an incredible color. Nice article too, I would have loved a picture (written or attached) of North Coast Brewery.

I agree with the picture–Drew, you have to have that camera on hand always. And also agree with Gemma’s color comment on the beer pic. Looks pretty amazing. And makes me thirsty.

Thanks for all the warm responses. Yes depending on which part of the country you are in you might be more suited for a Spring Seasonal or lighter ale. We in the NW are still getting those cold rainy days that we need a smooth sweet silky transition from coffee to beer around 5pm. If you have any must review beers, breweries or bottle shops let me know. I would love to hear them.

I agree with Sims, Old Rasputin sounds fantastic, but I am a weather driven beer drinker – dark stouts and lagers in the winter time and light IPAs and wheat beers in the summer time!

And cocktails all the time!

The true beauty of AJ’s books are you can take the base ingredients and flavor profiles of your favorite cocktail and change it up for the season. I am a whiskey, bourbon or Rye go to guy and citrus and herbs can change the same dark, think liquor I love in the winter to fit the warmer seasons.

Let me know if you have a seasonal or brewery that needs attention in your neck of the woods.