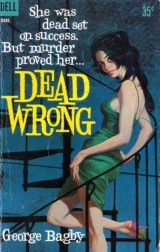 Recently decided that I was going to pick a random pocket book (here not specifically the company that shares that name, but the in-general usually, well, pocket-sized books popular mid-last-century, often leaning towards pulp-i-ness, but not always) from the stacks of them on one of my bookshelves, and ended up grabbing Dead Wrong, by George Bagby, pub’d by Dell way back in 1957. Featuring Bagby’s Inspector Schmidt and the author himself (one of the more interesting things in the Bagby canon is how he is in the books, just hanging with the Inspector and writing up his cases – things were looser in the police force back then), there’s the murder of a dancer, a short-but-curious list of possible suspects, and a few twists and turns. Not the most exciting of the genre, but worth a look, especially for the absolutely knock-out cover, with the knocking-out provided by (for me, at least) not just by the green-dress’d lady, but by the cool copy treatment. I would love to have that as a font option! It’s amazing. Oh, there are also a couple Cocktail Moments, highlighted by the below sleep cure. But that cover copy! The cover painting was by (according to the back cover), a Robert McGinnis, and Robert (wherever you may be), if you did the copy too, you are a genius!

The inspector introduced the two young men. Jack Champlin reached for the brandy bottle. He asked Andy if he would join him. Andy did.

“I’m not making myself drunk Inspector,” Jack said as he poured the brandy. “I seem to be using this instead of sleep tonight.”