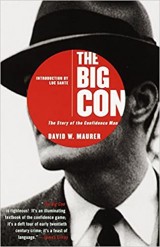 A rarity amongst the Cocktail Talk posts here on the old Spiked Punch, the below quote is from a non-fiction book, The Big Con. But what a book! The tome about the, well, the big cons that took place mostly in the early-ish part of last century (and on deeper into the last century, before being replaced by, oh internet scams), cons immortalized in movies and song and show. Written by a professor who earned the trust of tons of con men and underworld folk, David Maurer, the book breaks down the three types of big cons, how cons operated, where they did, the lives of con men, all that, utilizing lots of stories and the argot or lingo con artists used amongst themselves to throw the marks and squares off (don’t worry, there’s a handy mini-dictionary at the back). So, a scholarly work, but filled with stories and fun (as long as you weren’t getting taken). The below is taken from one story, which describes how one of the cons, The Pay-Off, might go off.

“Here, gentlemen, is a very good thing,” says Mr. Lamster. “You must excuse yourself for half an hour. Here are drinks and cigars. Help yourselves. Just make yourselves comfortable and I’ll be right back.”

“Put something on it for us,” call Ryan, half in jest.

Mr. Ryan and Mr. Fink sample the liquor and cigars. There is Seltzer water and ice. They sit back and speculate upon this peculiar person they have just met. “He may be just a nut,” observes Mr. Fink,” but at least it isn’t costing us anything. And this is good whiskey.”