Happy salivating September folks. Welcome to another month where you should be trying to have as many cool and creative cocktails as you can consume without causing chaos (or making you miss too many mornings). The reason, you might ask, if you were the asking kind, that September is so salivatious? It’s because of this very blog post, where I’m going to cut at least some of the chatter off the tree and present you with a few more almost drinkable photos from the San Francisco trip I had not all that long ago (and which I detailed a bit in a post you probably remember fondly called Drinks on the Road: San Francisco, Part I). But before the drink pics (hah, I always do this: set up, then aside), a quick shout out to my pals at the wondrous Chow.com, who brought me in to Chow HQ while I was in San Francisco to shoot some tips. And no, tips aren’t an endangered species (wow, the jokes come at a fast pace here at Spiked Punch), and yes I’ll post some later. But first, check out me preening while camera-person extraordinaire Blake Smith sets up a limoncello shot. You can’t see her here, but pal Meredith Arthur is taking the pic, directing things with calm and aplomb like she did all day (not easy to do when dealing with a diva like me). 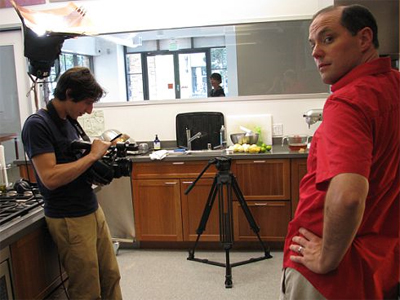 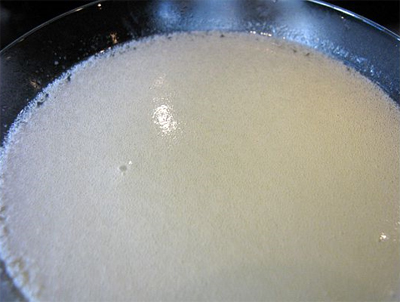 The next day after that (please, please, don’t ask me to name what day it was though), Nat I had a day of drinking delights. You know, I should copyright that phrase for my new tour guiding service (you know, I should have a tour-guiding service). “A.J.’s Day of Drinking Delights.” You’d sign up, right? Our first stop was in the middle of Chinatown (forget about, it’s Chinatown. No, no, don’t forget), where we slipped into the Budda Bar, a lovely little dive we had to ourselves, along with the amiable bartendress and the owner, who kept coming up to talk to us from the basement. We charmed him (natch), and he introduced us to the following unknown Hong Kong sipper (he insisted we swirl it around our mouth and teeth before swallowing though, as it’s not a shooter). I hadn’t had said spirited drink before, but it had a very powerful, not harsh, sense about it, like a good strong peasant grappa. 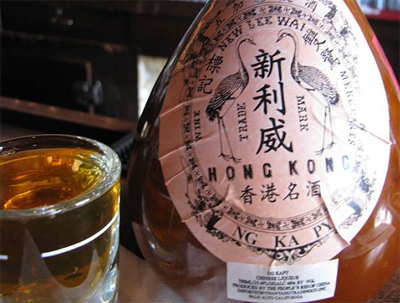 That night, we met pal Megan (from HCP and the A Year in the Life Beatles blog no less) at the Clock Bar, which is a stylish spot situated in the classic Westin St. Francis hotel downtown. It’s managed by a dapper and friendly fella name Matthew Meidinger, who not only helped me out recently with an article (which I’ll talk about when it comes out), but who also treated us to a few of the Clock Bar’s perfectly made cocktails that night, starting out (for me) with a slightly savory Sage Advice, a drink that could stand tall at any bar with its combination of Rittenhouse rye, Italian-specialty Averna amaro, fresh orange juice, black tea honey syrup, and good pal Peychauds bitters. I might like that drink so much I’d let it take my dogs for a walk. 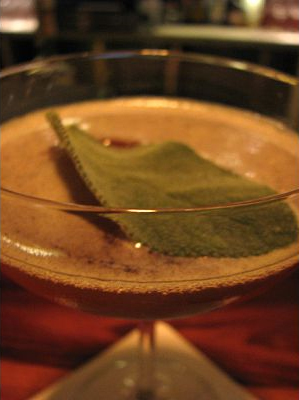 Matthew not only ensured we had a host of helpful (well, why not?) drinks at the Clock Bar, but he also pointed us towards the Heaven’s Dog for dinner and more drinks, calling ahead to assure us a spot, getting us a cab, and making sure we didn’t trip on the way out the hotel. I tell you, if you’re in S.F. and don’t visit the Clock Bar, you only have yourself to blame. For that matter, if you don’t visit it and Heaven’s Dog, then you shouldn’t even talk to yourself any more. Because Heaven’s Dog was also, well, heavenly. General Manager Erik Adkins met us at the door and swept us off our feet with his genial good nature and miles of smiles. What is it about S.F. and friendly bar folks? Sometimes it’s best not to question, and instead just be happy with your fine fortune (a phrase sounding somewhat fortune cookie like). At Heaven’s Dog we had multiple snacks from the dinner menu, which is set up for sharing and which has a Vietnamese flavor (like Vietnamese tapas, someone said)–perhaps the tops was the vegetarian pork belly, tofu skin, shiitake mushrooms, clam shell buns, and scallion–and all was yummy. But the drinks, the drinks were even yummier. Ours were made by the also-friendly and very knowledgeable Eric Johnson. He’s opening (by the way) a new spot called Bar Agricole in the very near future, so keep your eye open for it (and your mouth wide open). Eric made us a whole host of cocktails and highballs and their brethren and sisteren. Sadly, we didn’t take too many photos, as we were busy talking, drinking, and eating, and those we didn’t take we went flashless on (not to mention that I put the monkey book away, so am guessing a bit on what we had). But here’s one nice pic of Eric I think putting the finishing touch on a Gin Fizz Tropical, which was gin, pineapple gum syrup, orgeat, lime, egg white, mint, and soda: 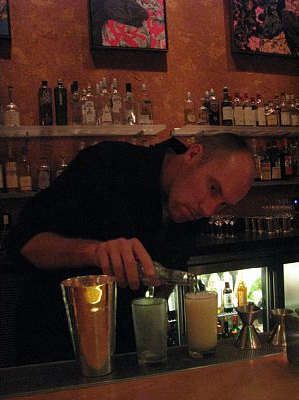 Ah, San Francisco and the many bars and just outstanding people on both sides of them. Hopefully we make it back soon. And if the above didn’t get your “thirsty” button pushed, then you must be a zombie. Except that even a zombie would be thirsty after those pictures. So, go get your zombie-self a cocktail, why don’t ya?