Editor’s Note: Beer-tertainer Drew Webster is back to beer-ducate you and beer-xplain the finer points of the beverage you love and call beer in another Drew’s Brews. 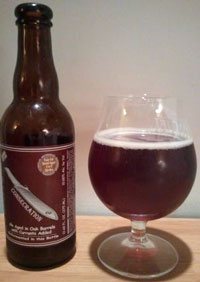 Sour beer is not for everyone. If you poured someone a sour without telling them they might have trust issues. However, if you were to discuss their palate and the complexity of beers available and then ease them into tasting sours in small amounts you might convert them into a beer dork.  Craft brewing is a booming business and there is a need for breweries to stand out and make bold beers that venture from tradition and borrow beer styles from abroad. Based on flavors usually found in parts of Europe like England, Belgium, and Germany most sours mimic Lambic and Saission varieties, to name a few. To get there, some American brewers use their flagship ales and blend their creation with aggressive Yeasts that changes the profile of the beer. The different temperatures used in brewing create unique and bold flavors that are crisp, sour, sweet, or spicy, which they blend with their base beer ingredients. There is a lot to it and it is fun to taste a variety of these artesian style beers.

If you have never tasted a sour beer or did but didn’t like it try doing a tasting flight with someone who can describe the beer or buy a set to try in succession at home. I always suggest Russian River, one of my old stand-by breweries, as a good starting point. They produce a line of “Belgian Inspired” beers that range in color and sourness beginning at mild and going to dark and high sourness. Buy a few and share with your friends. I recommend Damnation for starters (mild and light), followed by Temptation and finish with either Consecration or Supplication depending on what is available in your area. You may have to check out a craft beer store or nice bottle store to find them.  If you are up for tasting a bunch of sour beers in Seattle with people who will appreciate them check out Sour Beer Fest at Brouwer’s Café in Fremont May 17, 2012. Now in honor of Spiked Punch, here’s what I’m drinking: I will heed my own advice and go for the Consecration from Russian River. Very unique standout of the series. This reddish brown beer should be enjoyed in a snifter or short taster. Go slow with it. It is a blend using dark malts and mixed with those powerful yeast components in Cabernet Sauvignon barrels with a bit of Cab to make a fruity tart berry taste in your mouth. Nicely balanced acids go down smooth and awaken your senses–yum. Give it a try if you think you’re a brave beer drinker.