Don’t while away your weekend with uninspired cocktails–take a gander at the three options below from the blogosphere and drink the weekend up in happy fashion. And quit saying I never steered you in a positive direction.

White Lady: The recipe is about three-quarters into (so keep reading–not that you’ll wanna stop once you start) an in-depth and worthy post called “Eggy Weggies,” in which Andrew from Cask Strength details why eggs are so darn great in drinks, and why you should be using them more. And I say “amen” to that.

Our Man In Havana: Found on A Mountain of Crushed Ice (which is one of the best blog names ever), down aways in another in-depth and fully worthy post (about Havana Club rums—this must be my Friday for enjoying the in-depth, fun posts), this drink not only boasts an amazing taste, but shares a name with a Graham Greene book I love (the name was suggested by, as the post says, Jeffrey Morgenthaler). That’s kismet y’all.

Brandy Milk Punch: After all the Friday and Saturday effing and jeffing (and I mean that in the best way), it’s nice to have a Sunday morning liquid pal to return to center with, which is what Married with Dinner offers in this dreamy recipe. Wow, I love a good milk punch. If you don’t, then (well, first, I feel for you) just sleep it off until Monday. 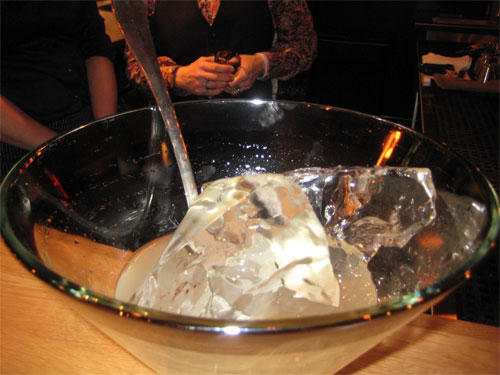 I promise to get up “U.K. Drinks: Part Two” soon (Part One’s below if you missed it), but to tide you over until that time (a time that’s, honestly, dependant on whether or not I can quit watching the new Robots in Disguise video for “The Tears” over and over), here are three cocktails for you to sip from the drinker’s blogosphere.

I feel bad I haven’t put any of my own drink-making fun up this week (cause I’m lame, or busy, or tipsy, or all three), but still wanted to point you to three mighty mixes from the blogosphere, to make sure you spend the weekend in high spirits.

Bring on the weekend, and the sooner the better. Speaking of “better” and “weekend,” make your upcoming Friday, Saturday, and Sunday rise to the occasion by trying out these three cocktails from the booze-y blogosphere.

Since the weekend is here (thankfully), I thought I’d point you towards four drink ideas from the drinker’s blogosphere to get your booze-y motor running and to give you some starting points.