There is something about a good con-man noir that keeps me coming back for more (actually, I wish I knew about more con-man noir books–let me know if you know any). Which is why I recently went on a three-day reading jag of Lawrence Block Hard Case Crime reprints. Hard Case not only has sweet covers, but has done a sweet job re-printing hard-to-get books from the mid-last-century, including some fine reads from Lawrence Block that just so happen to fall into the con-man noir area (that’s what I’m calling them at least). They also tend to have main characters who aren’t shy about drinking lots when passing the time between cons-and-or-murders, which is why I’m bringing them up here on the Spiked Punch blog. Cause we like our criminals a bit, or a lot, tipsy. In Grifter’s Game, the con is a gigolo of sorts who gets into trouble over a woman (as you might expect) and who likes both brown liquors (as you might also expect) and clear ones (which isn’t so expected), as evidenced in the following two quotes:

One hotel had a terrace facing on the Boardwalk with umbrella-topped tables and tall drinks. I found an empty table and sat under the shade of the umbrella until a waiter found me, took my order, left me and returned with a tall cool vodka Collins. It came with a colored straw and I sipped it like a kid sipping a malted. I lighted a cigarette and settled back in my chair. I tried to put everything together and make it add up right.

It was a panic, in its own quiet way. I picked her up in a good bar on Sansom Street where the upper crust hobnob. We drank Gibsons together and ate dinner together and caught a show together, and we used her car, which was an expensive one.

In the next Lawrence Block I read, Lucky at Cards, the con is an ex-magician turned card shark, who wanders into a mid-sized Midwestern town just looking to get his teeth fixed, but who runs into trouble thanks to a random card game and a random meeting with a curvy lady (hmm, I sense a trend). Here (as in many other books from the time) they’re not shy about having some serious drinks with lunch, including scotch and sodas and Martinis (it was a better time in some ways, people):

We had Martinis first. Then I ordered a ham steak and he ordered an open turkey sandwich. He told the ancient waiter to bring us another pair of Martinis. The drinks came, then the food. We ate and drank and made small talk. We were working on coffee before he said the first word about business.

The final quote for today (also from Lucky at Cards) isn’t a booze one, but seemed so apropos after three days of con noir that I wanted to end with it (and if it leads you to drink, well . . .):

Life is a hellishly iffy proposition from beginning to end.

My Kingdom for Another Cocktail Onion Cocktail

Don’t get me wrong now (at least not this time), I love the Gibson. Slightly tougher somehow to me than the Martini (its sibling), with a little edge and longshoreman’s attitude brought in by that right cocktail onion mixing it up with gin and dry vermouth. Yeah, I can drink a Gibson and smile–if it’s the right cocktail onion. Recently, I got a bottle of Saucy Mama cocktail onions, and liked them lots in my Gibson (or, Gibsons, to be accurate). They’ve got good onion flavor without getting any sour, a touch of saltiness and tang, and when mixed with 2-1/2 ounces of Voyager gin (which has that classic London gin attitude that makes a Gibson hum) and 1/2 ounce of dry vermouth magic of the right sort blooms (sure, that’s flowery, but there’s no need to shy away from the flowery side here and there). The only problem is, even with my Gibson love, I’m not sure I’ll use up the whole bottle of onions anytime soon. I could have a Gibson party (that might be fun), but I thought it’d also be fun to ask out there if anyone, anywhere, knows another delicious cocktail that features the cocktail onion? I have to imagine there are some–so let me know what they are. Or make one up. You’re creative, right? For inspiration, just gaze longingly at the below picture of my Gibson. Mmmm, cold gin, vermouth, and onions. 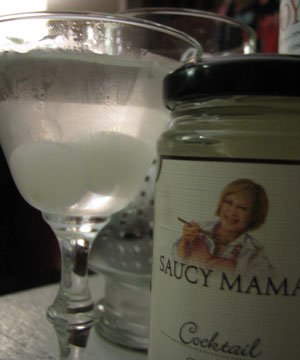