What I’m Drinking: Jubilee Liqueur (Homemade Liqueur, That Is!)

You probably know this, but just in case, recently the Queen of England had her Platinum Jubilee, which means (another thing you probably know!), that she’s worn the crown for 70 years. It is, in the United Kingdom (and other spots, it seems), a big deal to many, and many parties were had. And, cause she’s so nice, she asked me to come up with a Jubilee Liqueur that she could sip daintily from teacups during the various festivities.

Hahaha, did you believe that, just for a moment? It would have been ridiculously neat if you did. But sadly, it was a lie, the Queen does not know me or my liqueur-making prowess or that my backyard overfloweth with mint (wild and planted) or that I had some extra mandarins lying around lately. Or, at least, if she knows all these things, she isn’t telling me! However! I do have some pals who are from the UK, though currently living in balmy Seattle, and they like many (as mentioned above, in a way) were celebrating said Platinum Jubilee, with a big ol’ English-style knee-up shindig, doing it up right with oodles of eats and drinks and funtimes for neighbors and friends. And I thought – really, they deserve a present fit for a Queen, and so made this here liqueur in her and their honor. As you probably can guess if you’ve made it this far in this paragraph, it has oodles of mint, and some mandarin notes. It’s also based on gin, that most English of quaffs, which is a little different as most homemade liqueurs have a neutral base, while gin brings its own juniper, botanical, spice, citrus, what-have-you nature. Here, go with a good solid London/English juniper forward gin (that’s what I did!). The mint and citrus and gin and sweetness are such a swell snazzy combo, I gotta say – this really is fit for royalty. Including you! 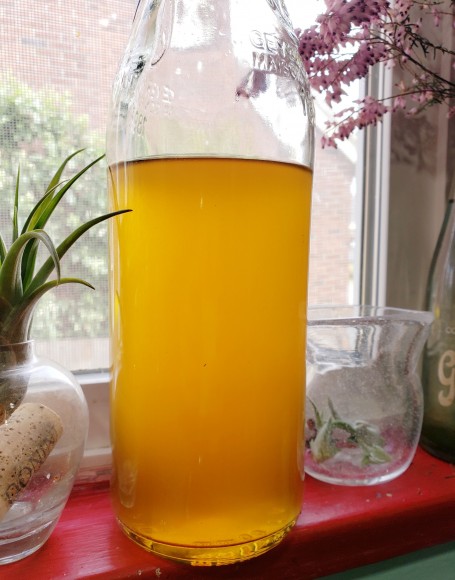 1. Carefully peel the mandarins. You want the peel, but you don’t want the pith – hence the care! Mandarins tend to be pithy, so you might need/want to scrap a little of that pith off. I did.

2. Add the peels – being sure to save the mandarins – to a large glass container, one with a good lid. Also add 2 cups mint leaves. Muddle the mandarin and mint.

3, Add the gin to the container, stir, and set aside.

4. We’re now going to make a syrup. Usually when making homemade liqueurs, I let flavorings and base sit together solo for a bit before adding the syrup. But as we’re using the juice from the mandarins just peeled, felt it should be made now. It all worked out! Okay, to start, juice the mandarins. Then add the juice and remaining mint leaves to a saucepan. Muddle gently, just to get the mint oils flowing.

5. Add the water and sugar and raise the temperature to medium high. Stirring regularly, bring the mix to a boil, then bring the heat down a bit. Keep it at a smooth simmer for 5 minutes, still stirring. Remove from the heat, and let cool completely in the pan.

6. Pour the mint-mandarin simple syrup into the glass container from Step 2. Stir well, and seal. Place in a cool, dark spot. Let sit for two weeks, swirling regularly. It looks like this: 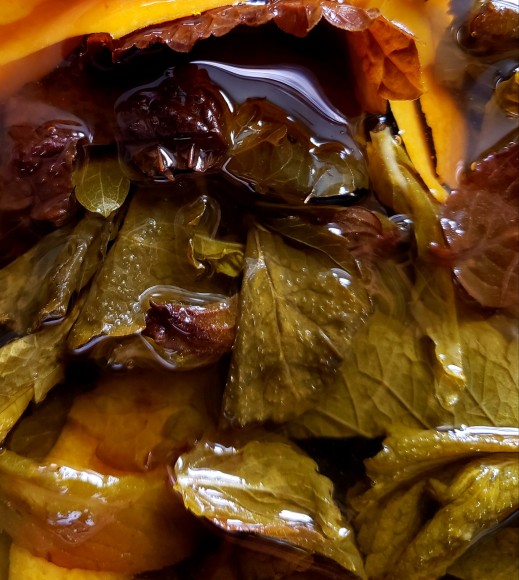 7. Strain (maybe twice!) through cheese cloth into bottles or one big bottle. Drink solo, over ice, or play around with it in cocktails, all while thinking monarchistically.

What I’m Drinking: The Mighty M

While I like many distilleries from around the world, I like Washington State distilleries best-est. I’m a local-leaner at heart, which maybe isn’t a bad thing. It does mean that sometimes I have recipes on here that are all WA distillers, which could be frustrating if you don’t live here. But then think of this – WA is a great place to visit, and when you visit, you can then visit our wonderful distilleries, pick up the ingredients used here, and, well, enjoy a wonderful life and drink. Boom! I solved all the problems.

The Mighty M is vaguely – very – Manhattan-y, uses two ingredients that have “M” in their names, and is a drink my old pal Joel Meister might like, and that’s where the name comes from. But the drink is based on a spirit without an M, funny enough, Woodinville Whiskey Co. Straight bourbon. An award-winner, if you haven’t had this becoming-legendary bourbon yet, well, you need to make the above referenced trip more quickly! Cause it’s great, aged five years, made with only WA grain from one farm, with a spice, caramel, chocolate taste. And it goes amazing with our other two pals in play. First, a WA-amaro (Wamaro?) that I only became hip to recently, Highside Distillery Amaro Mele. Made on Bainbridge Island on a base of their gin, which itself has an apple-spirit base, using five bitter herbs and aromatics and aged up to six weeks in a used Bourbon barrel, it leans on the bitter side of the amaro world, with a smoky, herby, beautifully bracing taste. You might be starting to think this is one of those drinks that’s good, but solely strong, without a sweeter side. Enter, our third ingredient: Salish Sea Maple liqueur. The first maple liqueur I’ve ever had, this all organic number is velvety and like a better maple syrup (it would make for amazing pancakes). It adds those distinctive maple notes, pairs perfectly with the above two players, and brings just the right light kiss of sweet. Altogether, a mighty drink indeed.

1. Fill a cocktail shaker or mixing glass halfway full with cracked ice. Add all the mighties, all three. Stir well.

2. Strain the mix into a cocktail glass. If you’re feeling it, try garnishing with an orange peel. Then let me know how it is.

I liked the first round of Mr. Sponge cocktail-talking so much that I’ve decided to extend his run on the Spiked Punch with two more quotes, one today and one the next time I decide to post (which should be later this week, but who knows, really? I could be called off to battle Gamera. That stuff happens). This time, there’s a bit of a party and Mr. Sponge is invited. And you are too (at least through this quote):

Sir Harry and party had had a wet night of it, and were all more or less drunk. They had kept up the excitement with a Champagne breakfast and various liqueurs, to say nothing of cigars. They were a sad, debauched-looking set, some of them scarcely out of their teens, with pallid cheek, trembling hands, sunken eyes, and all the symptoms of premature decay.

What I’m Drinking: The Straw Track

As I detailed a few ticks of the Spiked Punch blog ago (and in the swell Seattle Magazine), Seattle and WA are in the midst of a distillery boom of sorts, and I couldn’t be happier. All this fantastic local booze to sip and shake and sip some more? Great with me. One of the newer distilleries that I was a little slow to track down is the Sidetrack distillery, in Kent, WA, outside of the city of Seattle (I mention this mostly to give myself an excuse for the tardy tasting, not out of any geographical bias). Sidetrack is situated right on the Lazy River Farm and makes an assortment of liqueurs and fruit brandies with fruit grown on the farm–now that’s using local ingredients. This focus on fresh and homegrown fruit lends the liqueurs (full disclosure: I haven’t had the brandies, but am excited to try them. Second disclosure: I was given samples of the liqueurs) a bright, clear fruit taste backed by a smooth slight sweetness. There are four varieties: blackberry, raspberry, blueberry, and strawberry. I went with the strawberry here in the Straw Track cocktail, because it seemed to yell “summer” the most to me, and as it’s mid-February I needed a jolly jolt of summer. I think, though, that this drink is balanced enough, and bubbly enough, to have year round.

2. Strain into a flute or other charming glass. Top with chilled bubbly and garnish with that lemon slice.