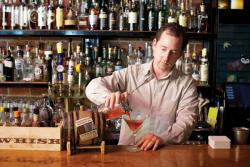 great piece! great stuff going on this town. Aging aint so bad after all.

Thanks Tami. And you’re right–there is lots of great cocktail stuff happening here. I feel lucky (and tipsy).