This drink has one of the truly adorable classic-y drink monikers in my humble opinioning. Well, the original does, meaning Maiden’s Blush, the first. That coy cocktail (if you don’t know) features gin, orange curacao, grenadine, and lemon juice, and is a mixture surely fit for most maiden’s a-blushing. Which may be all, as I think maidens and young ladies (and perhaps not-as-young) do blush a little, even in these rough-and-tumble days. However, my lords and ladies and maidens and non-maidens, today we are sipping on, and blushing about, the lesser-known Maiden’s Blush #2. Actually, I think the name is just as good, as it calls to mind that second maiden, the one that’s a tad overlooked at first, because she’s a bit bookish, and not so la-de-da, and she wears her hair back, and her gown isn’t cut up the thigh, and she has a pair of cat’s eye glasses on. I sorta like her. And I like this drink, though admittedly it’s not for all, due to the decent-sized dollop of Pernod in it, alongside the gin and grenadine. It works, though, if you sway towards things like Pernod, as long as you use decent (and by that I mean: homemade) grenadine, which has a tangy berry-ness that balances everything. If all that wasn’t enough, the famous Harry Craddock (famous in an early-19th-century-bar-star way, plus the author of the Savoy Cocktail Book) said about this drink, “on the principle that if you first don’t succeed, cry, cry again.” 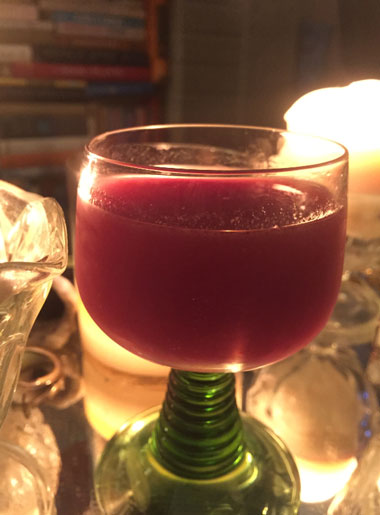 2. Strain into a cocktail glass. Begin the blushing.

It’s late June, a sleepy sort of summertime, full of days where waking up early and going to work seems downright silly. Though maybe you have these feelings all the time? Anyway, a good suggestion* for overcoming that feeling is starting things off right with a London Fog – this very drink. For celebrity endorsement, Burgess Meredith used to swear by this concoction as a morning pick-you-up. And Norton Pratt, who edited the Boston Telegram once up a time, says this will cure you when you feel “like a basket of busted bungholes.” I can’t think of anything to say that would top that, so just go make the drink whydontcha? 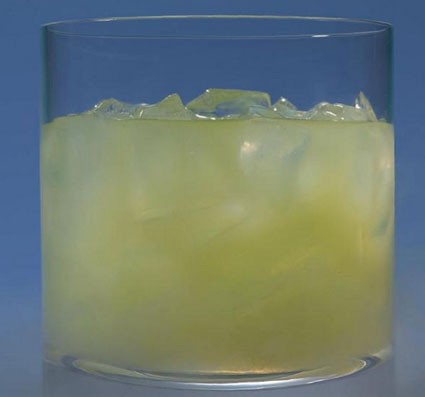 1. Add about a cup of cracked ice to a mixing glass or cocktail shaker. Add the gin and Pernod.

2. Stir well (so well that it seems you’re frappe-ing the mix). Pour everything into an Old Fashioned glass. Drink quickly, before the body realizes what’s going on.

*The actual validity of the “good” here varies depending on the job naturally. I’m sure not suggesting you drink before operating heavy machinery. But if you’re just heading to the cubicle farm? Why not?

Sometimes, a quote just speaks for itself (which means this may well be the shortest Cocktail Talk post on record. Oh, one thing: this is from one of the Complete Imbibers. Read more about them by following the link in the preceding sentence):

I remember, for example, being taken to see a neurotic Frenchman who was staying there with his wife, and vividly recall Sunday morning in his suite, the wireless resounding to a clergyman’s voice reading the Lesson, while we drank Pernod, and a Pekinese tried in vain to seduce a monkey.

–Anthony Powell, “A Bottle of Wine at the Cavendish,” from The Complete Imbiber 6, 1963

My Chester Himes quote from a couple days ago has spurred me to want to put up a couple more from his Harlem series starring the two toughest-named detectives ever: Coffin Ed Johnson and Grave Digger Jones. In The Heat Is On, Grave Digger almost buys it, which almost has Coffin Ed taking out half the city. But by the end, Grave Digger is okay, and Coffin Ed is going out for a calmer.

Leaving the hospital they ran into Lieutenant Anderson, who was on his way to see Grave Digger, too.

They told him how he was, and the three of them went to a little French bar over on Broadway in the French section.

–Chester Himes, The Heat Is On

Cocktail Talk: The Wine and the Waistcoat

Wait, hold up, before introducing this quote, let me say happy freaking New Year booze-y pals. Here’s to a fantastically tipsy 2009. And, while it’s not 01/01/01/09 (the first second of the first day and all), it’s still the year’s start, and this quote is a sillily lovely way to start said year. It’s another bubbling gem from The Complete Imbiber #1, from an essay by Paul Holt (who, I feel bad to admit, I don’t know much about–any help?) called “The Wine and the Waistcoat.” In it, he talks about drinking and dressing, but it’s a fairly long quote, so I’m just gonna back out of its way:

“In this connection I feel I must deal with the problem of pink champagne. It is well known that many a romance has been wrecked for the lack of this romantic tipple.

I would say, here, that if it must be drunk in such a good cause, the costume is absolutely de rigueur. A sincere dressing-gown with red morocco slippers is as important as the guardsman’s bowler and brolly. (This last attire goes excellently with a large whiskey in the morning, particularly if you can manage to hide the brief-case that so cruelly accompanies it these days.) . . .

Perhaps, after all, it is best to stick to Pernod, if the sartorial consequences of imbibing interest you as much as they do me. This if only for the reason that however you start off drinking the stuff, you’re bound to end up more or less naked.”

— Paul Holt, “The Wine and the Waistcoat”