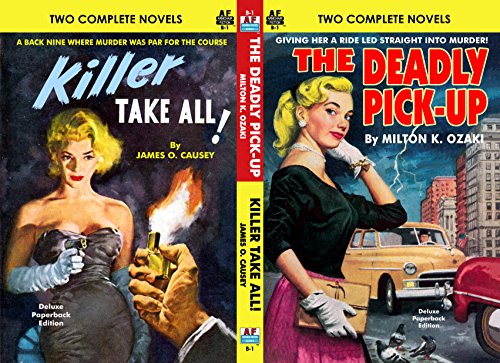 “But you won’t enjoy it. Wait.” Kiernan put his glass on the bar and marched to the door on the left and on out. In five seconds, he was back, with a bottle in his hand, and as he rejoined us and asked Santa Claus for a glass I saw the Pernod label. He pulled the cork, which had been pulled before, filled the glass halfway, and held it out to Bottweill. “There,” he said. “That will make it unanimous.”

“Thanks Al,” Bottweill took it. “My secret public vice.”

If you missed The Two-Penny Bar Part I, be sure to catch up on your brandy – and reading – and for that matter, don’t miss a one of the many mighty Maigret Cocktail Talks, cause they are full of boozy jolly-ness, and will point you to many a classic read by George Simenon. This book (as it says on the back) that goes into the “sleazy underbelly of respectable Parisian life,” is too good, too, for just one Cocktail Talk post, especially because this second one has the good Inspector Maigret a little over-indulged on one of his favorite tipples – but this book does center around a bar!

“What are you drinking?” he heard a voice ask. “A large Pernod?”
The very word was enough to remind him of the week gone by, the Sunday get-togethers of the Morsang crowd, the whole disagreeable case.
“A beer,” he replied.
“At this hour?”
The well-meaning waiter who had offered him the aperitif was taken aback at the force of Maigret’s response.

What I’m Drinking: Now and Then a Porcupine

Do you go through phases in your cocktail-and-spirit-sipping? I’m sure you do, though admittedly I know some who have the same drink every time, year round, and I myself when younger probably had a lot of the same drinks. For some, it’s their signature I suppose. And then some have drinks via seasons, or occasions. And you know what? All those are fine, as long as you’re having fun! Fun is good! I, myself, now-a-days, often go through phases where I’ll have more of a certain spirit, or brand, even, sometimes solo, sometimes in cocktails. Recently, I’ve been on a bit of a Pernod jag, for example, having it over ice, or neat, or in drinks like this one!

In which, I took what may seem a step into the unknown, as I mixed it with underutilized (in the main, I’ve found, though perhaps here and there inroads are happening, and naturally this doesn’t go to the Nordic regions) spirit aquavit, specifically Wintersun aquavit, made out here in WA, specifically (again) in Everett, by Bluewater distillery. Wintersun has a swell balance, with that traditional caraway mingling with aniseed and orange, all on an organic grain spirit base.

That flavor profile seemed like it’d play well with Pernod, but something more was needed, and I went with French aperitif pineau de charentes, specifically (one more time!) Chateau D’orignac pineau de charentes, made from Cognac and lightly fermented Merlot and Cabernet Sav grapes, and aged in oak five years. The result is a citrus, floral, fruity delight, which goes (delightfully) with the other two members of our trio in this curiously-named drink, which is also curiously-light, with anise, orange, and spice undertones.

Now and Then a Porcupine

2. Strain into a cocktail glass. Garnish with that wide orange twist. Drink up.