Sometimes, people are sort of pooh-pooh-y about Scotch cocktails (though of course there are numerous classics, and noble new ones, too, so maybe attitudes are changing even as I type and I’m just not caught up with the word on the street), thinking that Scotch is only to be sipped solo. But I can’t resist trying it in cocktails. You don’t have to drink them if you’re feeling pooh-pooh-ingly, but that’d be your loss. People also sometimes feel the same way about sweet drinks, usually as they’re eating a doughnut or a pie (not a savory pie, but you guessed that). If it’s not bitter or high proof, they get all angry. Well, that’s silly as (much as mentioned above), there are many classics that utilize sweeter ingredients without getting all sickly about it.

But for folks that fall into those camps (those very very sad camps), well, you’ll want to ignore this drink. Not only is the base Scotch, but it uses two fairly sweet ingredients with it. HAH! IN YOUR FACE! I recently received (lucky me) a bottle of one of my favorite blended Scotches, the Famous Grouse. Not only carrying an amazing name, it’s been made since the late 1800s, is the most popular Scotch in Scotland, and it delivers a taste containing caramel notes, some nice spice, and breezy hints of smoke and citrus. Neat! Meaning, it’s good neat, but also lovely in cocktails.

Our sweeter partners here are nutty: Kahana Royale Hawaii Macadamia Nut liqueur (which is sweet, sure, but not so much that it overwhelms the nuttiness), and Praline Pecan liqueur, which as the bottle says is made in the New Orleans style. It’s a sweetie like the candy that carries its name, but also has a nutty nature. They go nicely with the Grouse and all together unveil a somewhat-buy-not-annoying dessert-y style drink that doesn’t go too far, with that solid background and Scotch-i-ness coming first when sipping, followed by a candy and nutty sweetness. The key, though, beyond those ingredients, is a wide orange twist, one that’s somewhat wild. The citrus oils balance the sweetness and the wildness makes everyone play nice. Nice, I tell you, and also make this a wonderful post-dinner treat. 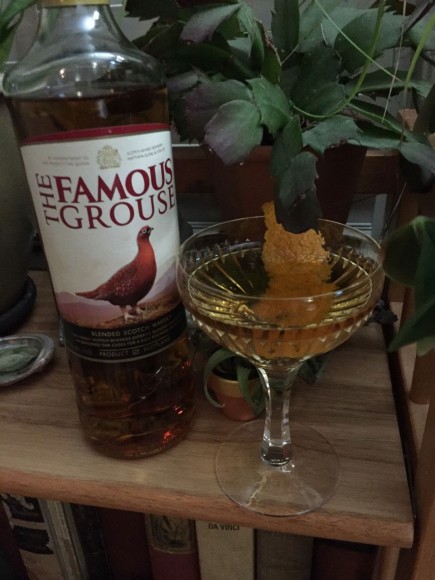 1. Fill a cocktail shaker or mixing glass halfway full with cracked ice. Add everything but the twist. Stir really well.

2. Strain the mix into a cocktail glass. Garnish with the twist. Enjoy!