If you haven’t yet checked out the delicious photography and dishes (and drinks) at the blog Consumed(I, This), then let me point your little heads in that direction. But don’t start checking it out if you’re hungry, because the photos are so well shot that you’ll probably try to eat the screen. Or drink the screen, as the case may be, though there are more dishes than drinks. Up until recently, Consumed(I, This) was just photos, but I’m guessing that enough folks were begging the friendly photo-taker-and-blog-writer Michael Hoffman for recipes that he decided to put the recipes alongside or under the scrumptious pics. Luckily, it’s not all food though. Michael is also a cocktail and homemade liqueur devotee, and the following sweet shots show the liqueurs he has brewing up currently: Bartlett Pear with Lemon Zest, Grapefruit-Coriander, Walnut-Clove, and Ginger. Pals, start salivating now. 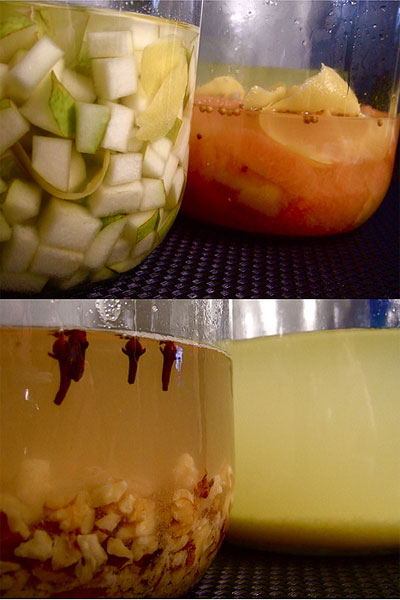 « Cocktail Talk: The Wine and the Waistcoat | What I’m Drinking Right Now: The Drowsy Chaperone »