I was lucky enough (being a drink-writer has its benefits–and I’m not just talking about taking booze purchases off taxes, or being heralded by slobbering boozers, or being able to have random people, taxi drivers, stewardesses, policepeople, look at you incredulously when you tell them what you do) last Sunday to be a judge at the very first Iron Bartender competition here in Seattle, held at the TigerTail. They sorta had to let me be a judge, cause I proofed the press release, but I’ll take what I can get. That said, it was awfully fun and a little messy, and I got to sip some tasty new mixes, which is always a worthwhile thing to do on a Sunday evening. 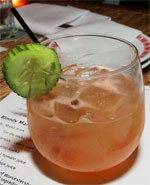 Here’s the basic overview (I’m not going to get into every teeny-tiny particular, cause I want to get to the photos). Two hot shot bar-slinging trash-talking contestants (the affable Dallas Taylor and the mighty nice Mike McSorley) battled it out over three 7 minute and two 10 minute “bar rounds.” Well, it only ended up being one 10 minute round, but that’s okey-dokey. We had a bit of a back-up in starting time, so it worked out. In the three shorter periods, the contestants used a “secret ingredient,” which I can now tell you was scrumptious Marteau absinthe, and any complementary products that they could find to create a series of drinks (the first two matching up with TigerTail menu items): aperitif, entrée, bartender’s choice, while in the two(*one in real life) longer rounds the contestants whipped out a series of drinks ordered by the crowd. The winner was crowned by a team of three alco-judges (me, awesome Andrew from Liberty, and delightful Kelly O, Drunk of the Week columnist for the Stranger, who also took the photos I’m posting here–thanks Kelly), who scored contestants on the use of the secret ingredient, the overall excellentness of the drinks, drink-making technique, style, wherewithal, and bar sense (or lack there of) demonstrated throughout the competition as well as anything else we felt like grading them on. Good spirited times. No pun intended.

Here are the incredible judges getting ready to use the gong (and drink up the drinks):

Here are Dallas and Mike in the beginning, before the divisive spirit of battle took hold: And here Mike’s bringing the heat with a flaming absinthe spray: While Dallas exhorts the crowds into a drinking frenzy: Sadly, only one winner could be crowned (both of the bartenders brought it pretty well), and that winner was . . . Mike McSorely: Okay, I realize I didn’t bring up exactly what they made, or even close-to-what-they-made, but rest assured the drinks were good, and absinthe-y, and utilized things like aloe syrup, celery, and lots of gin and fresh juice. I somehow misplaced my notes (hmm, why is it that drinking and note-taking never works out, but drinking and note passing is so much fun?), but when I find them, I’ll try to remember to give an Iron Bartender drink rundown (I do know the drink pic at the top of this post is one made by Dallas called I think the Dear Girl, which was pretty darn good). The word on the street is that they’ll be more Iron Bartender competitions soon, and I, for one, can’t wait to see the bartending badassery and liquor-y chaos unfold again.

I’ve never given this a try, but I think it’s about time I do.

« Cocktail Talk: Who’s Afraid of Virginia Woolf? | Are You Ready for Some Football Punch? And Some Quesadillas for that Matter? »