What I’ll be Drinking Soon: Something Bourbon-Based with a Big Ice Cube at Vessel

I’m not 100% sure what the below picture is, cause I stole it off the Vessel web site (I’m also not a very good thief, as I just admitted it, and hopefully Basil Childers who took the lovely photo doesn’t get too angry). Vessel, if you don’t know (and if you’re not living in Seattle, you’re forgiven, but if you are living in Seattle and don’t know, then I can only ask loudly: What The Heck Is Wrong With You? Notice the cap’d letters for emphasis, but not all caps, because I do still have lots of affection for you, so don’t want to be too screamy), is one of Seattle’s top cocktail spots (really, one of the nation’s), where the bartenders tend to be charming and in vests and always know how to pour a very well-prepared drink. Anyway, as a little Friday treat I’m heading over there (it’s at 1312 Fifth Avenue in downtown Seattle, just blocks away from the monolith where I spend my workdays) right after work at 4 pm, to have myself a drink before heading home. And I think I want the drink to be the below, whatever it might be, with its large ice ball (hah, that’s fun to say) and obviously brown booze base. If you can’t make it there at 4 pm with me, then I suggest you at least have yourself a nice Friday cocktail somewhere. Because you know what? You deserve it. 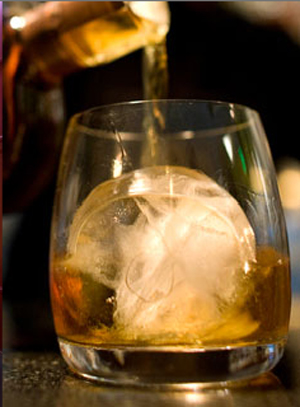 Posted in: Almost Drinkable Photo, Bars, What I Wish I Was Drinking