Sipping Behind Closed Doors at the Knee High Stocking Company 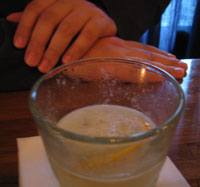 When a trusted confidant and drinking pal (in this case, it was Stereolad, alias Senor Crappy) sends an email that says things like the following about a new bar just visited:

“Although it’s a legit establishment, there’s no signage and you have to ring the doorbell to be admitted. But the awesomeness is what’s inside.”

“Ben {the bartender} came over and asked us a couple more questions (“Is rye OK instead of bourbon?” “Sweet or dry?”), disappeared briefly and presented us with a Remember The Maine (rye, Heering, sweet vermouth, and absinthe). Lovely. He came back for a follow-up and told us that he’ll do egg white cocktails for any takers.”

I get a little twitchy, partially with excitedness to visit said place, and partially with wondering if it can be true, and partially with thirst. And partially just cause I’m twitchy. It’s like a super power. But a lame one. I digress. The rest of said email was asking if we’d want to stop by the new bar, and so we (in this case wife Nat and I) took him up on it last Sunday and slipped into the Knee High Stocking Company.

By slipped in, I mean somehow managed to find the door, as it’s in a fairly out-of-the-way spot, and only has a very small sign (about knee-high, now that I think about it) next to a door bell with another sign that says “ring.” See, there’s no way in without ringing the bell, and it’s all very hush-hush, and speakeasy-esque, and painted blue (that’s about it for hints). Once we rang said door, above-mentioned bartender (Ben, that is) opened it, peeked out at us, asked how many we had, and then showed up to a table right near the bar. But I’m starting to wander, so let me skip the other atmospherics and say that the space was small, comfortable, dimly lit, and, well, cool in an unassuming and unpretentious kind of way. Which is just the way I like.

I started up with a Widow’s Kiss after mulling the nicely-balanced menu. It’s a combination of Calvados, Green Chartreuse, Benedictine, and Angostura, stirred up and served with a cherry. Ben filled me in when delivering it that it was from George J. Kappeler, circa 1895 (and not Gabe Kaplan from Welcome Back Kotter, though the joke was, of course, made by me. I’m thinking it was from the book Modern American Drinks, which I sadly don’t have. Yet). 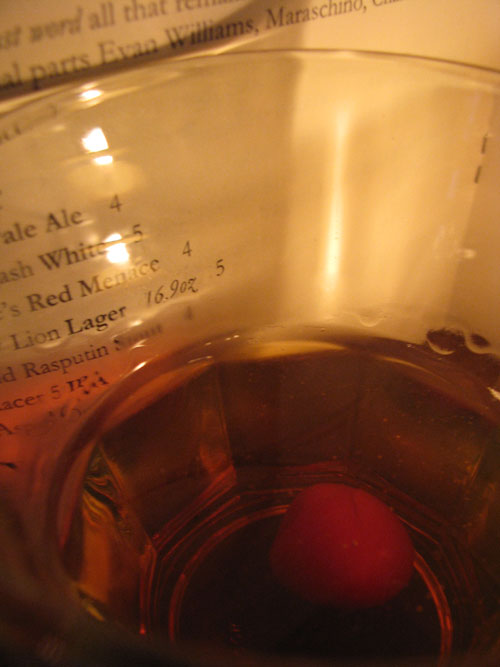 It was delish. Had some backbone, but the Chartreuse and Benedictine and bitters came out with each sip, each bringing a little herbal joy to my afternoon. The other big kick was starting to realize that Ben was a bartender I could trust. He not only brought out a good drink, but a good bit of history. When he said something along the lines of, “I’m working on mastering the old classics, and then slowly working on mixing my own ideas” then I knew he was someone I’d be happy to have pour me many drinks.

Which led to my next choice (oh, wait, first, let me say that Stereolad had, I think it was, a Flor De Jalisco for his first sipper, after telling Ben only that he wanted something refreshing, not bitter-y, and a touch fruity, and that tequila was dandy. It was awesome, too, and hit the notes Stereolad wanted. That picture at the beginning of this post is it, in front of Stereolad’s manly mitts. I believe Ben said it was a Death+Company drink, which is always welcome at my table). Or, led to me asking Ben what he might like to make using the Bitter Truth bitters I saw behind the bar (for those who don’t know, Bitter Truth is a couple of German bitters-heads who make an assortment of tasty stuff, much of which I  haven’t even tasted). He whipped up an Opera, tracing back Harry’s Bar, from way back in the 1920s (it’s in Paris), which had gin, Dubonnet Rouge, old compadre Maraschino, and Bitter Truth orange bitters. And a twist. Good golly, that’s enough to make a man like me dance in happiness as if in a touring company doing Breakin’ II: Electric Boogaloo. And I didn’t even mention the twist. Cause I’ve written more than you’ll find on most Christmas letters already. And I still need to mention three more things. First, Mark’s second drink was worthy of song, but I’ve forgotten what exactly it was, so instead of going on and on, I’m just going to show you this picture of our drink off (notice my unshaven-ness due to it being Sunday–I’m a bad man): 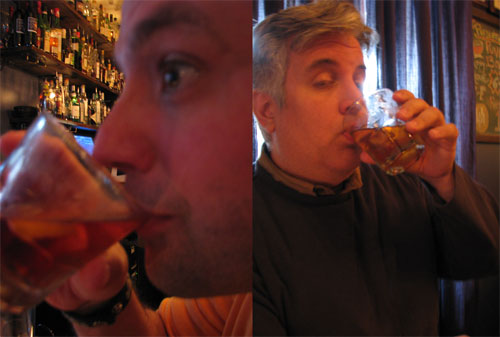 Second,and this isn’t about booze at all, but about mac-and-cheese, which was also had, and which was gooey and a smoosh spicy, and had a crisp about the top side: a winning combination by any stretch. Third, Nat was on call for a baby that might never show (darn those babies and their desire to forgo the outside world. Wait, that was sorta like us on Sunday at the Knee High. And yes I’m already truncating the name. I’m that guy), so she wasn’t drinking boozy booze, but Ben was swell enough to make her a ginger ale from scratch, and it was delish, too. Here’s an artsy shot Nat took of the g/a: 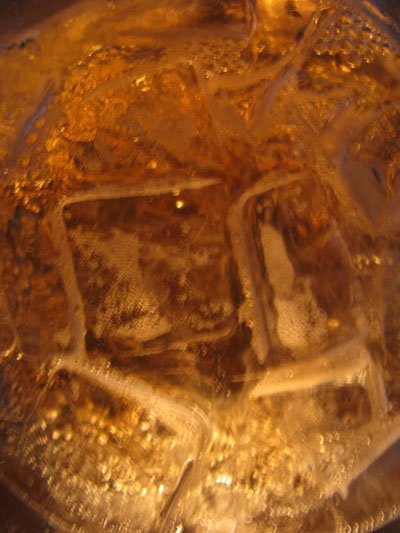 The verdict? I wanna go back right now. The Knee High Stocking Company has a speakeasy-woven-ing-with-your-neighborhood-bar vibe that doesn’t show its head all that often, but which is to be revered. Dandy drinks, chops-licking food, out-of-site conversation with good pal and hot wife: that’s the prescription for a perfect Sunday late-afternoon-early-evening, and I feel lucky I got to be there for it.

PS: Ben works Wednesdays, Saturdays, and Sundays at the Knee High Stocking Company. I suggest you make his acquaintance (if you’re in Seattle–if not, find him when you visit). I’m not going to tell you how to get there exactly, cause it’s something you should work a little for. And because I don’t want it to get so crowded they won’t let me in the door.

Pretty nice post. I just found your site and wanted to say
that I have really enjoyed reading your blog posts. Any way
I’ll be subscribing to your blog and I hope you write again soon!

I now feel like a Cocktail Sherpa. The second drink was The Brolin, which I believe that Ben tweaked from the original blend of rye, applejack, Cynar, simple syrup, and orange bitters. And because I’m your fact-checkin’ cuz, Drink #1 was the Flor De Jalisco which rocked the marmalade and agave. (Ordinarily, I’d let it slide but if you Google the Floridita, you’ll find a cocktail equivalent of a casserole.)

Stereolad, you are the Sherpa–the booze Sherpa. And thanks for the drinks updates and the pavement shout outs. Now to the Knee High.

I would like to apologize to the spirit of these spirits for going to the ball game today and paying $15 for two MGDs. Somehow I feel like I’ve let you all down. I will not, however, apologize for paying $7 for ice cream in a little plastic baseball helmet.

Also, I appreciate you for drinking on a Sunday while it was still daylight. Hat’s off to all of you.

« What I’ll be Drinking Soon: Something Bourbon-Based with a Big Ice Cube at Vessel | Drinking Writer Alert: Ed Skoog and a Julep »