What the heck–it’s the 16th of June already? And I’m only just having my first “buck” drink? And it’s not even an Orange Buck, but the sultry-cousin-who-sits-in-a-loose-dress-on-the-porch-driving-the-neighbors-mad-with-desire-while-at-the-same-time-barely-perspiring-and-looking-all-kinds-of-languid New Orleans Buck? And I’m using the Nicaraguan-made Flor de Cana Grand Reserve 7-year-old dark rum (which, I have to admit, so you don’t think I’m some kind of un-admitting flunky, was sent to me in the mail not too long ago from someone in New York–who I’m thanking right now, cause really, it’s tasty rum)? All of this probably leads many old Kansans (pals KT and Markie Mark, for two) to saying one thing: “that’s bucked up.”

But really, my old Orange Buck brethren, forgive me. The New Orleans Buck is darn refreshing, and is a very close relative of the O.B., and part of that legendary Gin Buck family that traces back, oh, to at least the 1920s. And if you’re new to this whole “buck” thing, let me promise you: you’ll be happy to dive in here, because this is a happening and cheery summer drink, one that fits backyard kick-backs remarkable well. You can slim the rum down a snitch if you must (I like the umph, but wife Nat thinks a little less booze bring the refreshment factor up a notch. Take your pick pals, and let me know what you think), to say, 2 ounces. But don’t you dare mess with the ratio of ginger ale to orange juice. That has to stay at 1:1. Or the universe will implode. Which is a messy situation anytime, but especially sticky in summer.

3 ounces dark rum (or a little less, as mentioned)

2. Carefully add the orange juice and the ginger ale at the same time. Stir briefly.

3. Squeeze the lime wedge over the glass, then let it join the mix. Garnish with the lime slice. 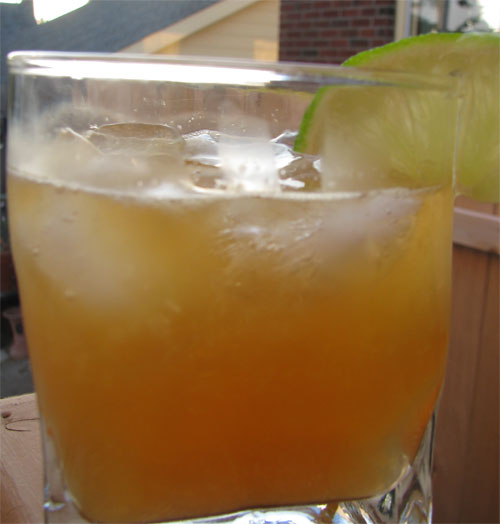 A Variation: For an Orange Buck, substitute gin for rum, and for a Nordic Buck, sub in vodka. For a classic Gin Buck, make it with gin and no orange juice.

PS: Hopefully this isn’t too mercenary a mention, but this here drink is featured in a book called Dark Spirits, which doesn’t hit the shelves until fall of ’09, but which you could, if you wanted, pre-order right now, so as to insure you’re the first on the block with it in your pretty little hands.

Holy shit, that sounds so good right now! It’s sooooo hot and gruesome here in Indy right now that I’ll probably drink these up until I’m passed out. Hoo-rah!

« Cocktail Talk: Chicago Confidential | What I’ll be Drinking Soon: Something Bourbon-Based with a Big Ice Cube at Vessel »