I Miss the Days of Murderers in Bars

Okay, that’s just a catchy headline in most situations, because in most situations I like my bars safe and booze-y and full of cozy chums. But for some reason, the below panel, from a knockout Stan Lee / George Tuska comic called “Acid Test!” printed in the October 1973 issue of Tales of the Zombie #2, (though originally presented in the July 1953 issue of Menace #5 under the title “Nightmare!”–huge props to the amazing pre- and post-code horror comics site The Horrors of It All, which is where I found this, and where I visit every day to get my chill on) made me think of how some days you go to a bar to forget, or try to forget, the murdering you’ve done. That’s all right, too (even if for most of us it’s symbolic murder, one hopes). Especially when the bartender below is such a dead ringer for bartending pal Andrew B. Or is it bartending pal Andrew F? Now that I look at it, a bit of both. The fact that the bartender turns out to be a certain famous evil-doer has nothing to do with it, naturally. 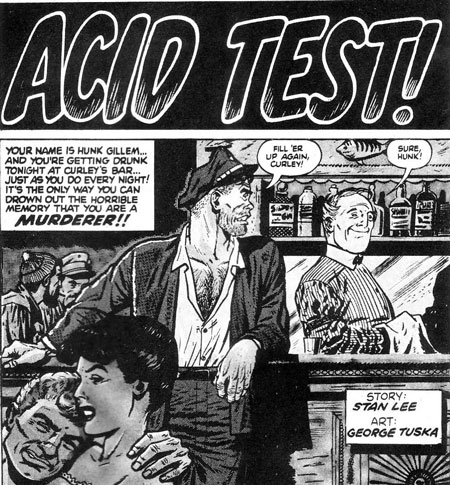 « I’m in Penthouse Magazine: Check Me Out | I’ve Been Lego’d By Andrew Bohrer »