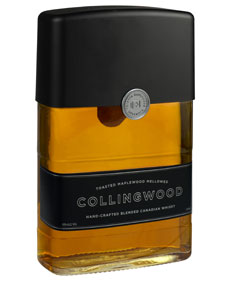 Sometimes, being a person who writes about cocktails leads to some tasty situations (and I’m not just saying this to start jealous rages out there, just stating a fact. And hey, sometimes I write about them on this very blog, sharing the tastiness). One recent example sent my focus northwards, towards our friendly neighbor nation, Canada. See (to stop being mysterious) I recently received the news that Washington state was going to be one of the first states to get to try the new Collingwood Canadian whisky*.

I tend to like Canadian whiskies (really, I tend to like all the boozes, as you probably know), and think sometimes they don’t get a serious look in our modern cocktail-and-liquor culture. Which is a shame, but hopefully a shame that will be rectified as folks continue their liquor explorations and as new distillers put their stamp on the genre with whiskies like Collingwood. Distillers like (for example, and yes this rambling is going someplace) Brown-Foreman Master Distiller Chris Morris, who was responsible for Collingwood. And who (see how this all ties back into that tasty situations bit above) was kind enough to take some time to talk about Collingwood, Canadian whiskies, and the distillery process. Because I’m wordy, the interview went on a bit, so I’m breaking it into two sections. Part 1 starts below, and Part 2 will be on the blog in a few days.

Oh, one more thing: if you live in Washington (or in Florida, Kentucky, Louisiana, or Texas, which are the states Collingwood is currently available within–though by the time you read this, your state may have it, too), I strongly suggest you pick up a bottle of Collingwood before starting to read. Because you’ll surely want a glass for sipping by the time you finish reading.

A.J.: To get started, for those out there who may not know (even those who don’t want to admit it), could you give a quick primer on Canadian whisky? Is it just whisky made in Canada? What else defines it?

Chris: I think the Canadian whisky category is one of the least understood in the whiskey family.  By definition, a Canadian whisky is a potable distillate, or a mixture of distillates obtained from a mash of cereal grain or grain products that have been saccharified (turned into sugar) by a diastase of malt or other enzymes. Spirit is created by fermentation with yeast or a mixture of yeast and other micro-organisms and then aged in wood for not less than three years. All of this activity must of course take place in Canada. Bottling of the product can take place outside of Canada as long as the product is not presented at less than 80 proof (40% abv). The final product presentation may contain caramel coloring and flavoring.

A.J.: And to follow that up, what sets the new Collingwood apart from other Canadian whiskies? And, from other whiskies in general?

A.J.: As you were constructing Collingwood, were there certain, let’s call them whisky personality traits that you were aiming for?

A.J.: As a Master Distiller, are there specific steps and paths you take when crafting a new whisky, or more experiments, or a bit of both?

Chris: A Master Distiller should draw upon their years of experience as a source for inspiration and innovative concepts.  The resulting concepts must be validated through rigorous experimentation that sometimes takes years.

A.J.: Was there anything in the process of crafting Collingwood that surprised you?

Chris: Experience has taught us to expect the unexpected. That is where the “ah ha!” factor comes into play. Sometimes during experimentation a new course to follow or concept to pursue develops that is more interesting (tasty) than the original one. We thought that Collingwood would be sweeter rather than more spicy than it turned out. It was a great development.

Okay whisky-adoring kiddies, that’s the end of Part 1 of interview with Master Distiller Chris Miller. Be sure to come back in a few days for the rest of the interview, to learn more about the new Collingwood Canadian whisky (including tasting notes and Chris’ choice for a cocktail utilizing it) and to tempt your liquor-loving tastebuds.

*To be completely open and honest, I did receive a bottle of Collingwood in the mail. But I wouldn’t ever tell you I liked something I didn’t actually like, friend. And I liked the Collingwood lots.