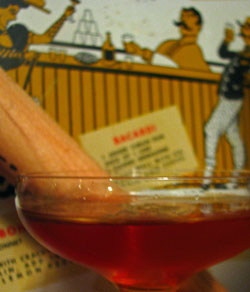 Those who known me well (or who have ever met me, or ever read this blog, cause honestly, I’m somewhat of an open book, and have been known to go along and along and along a bit, even though you may have a hard time beliving that now) know that I spent my formative drinking years, if not my formative cocktail-creating years, in Kansas. Which may lead you to hypothizing that this particular mix was monikered after the big city in northeastern corner of that state. But, mysteriously, it’s not. Hah! And neither is it named after the ingredients (which include scotch, some homemade cherry hazelnut bitters, and superstar and super-misprounced Italian sweet vermouth Carpano Antica). Hah! Instead, it’s named after two separate gentlemen. First, a fella named Ken who writes the Price Family Farms blog (when he has time and sunshine) and who created those homemade bitters alluded to just two sentences before this one. And secondly, a fella named Callanan (first name Dave, but don’t stalk him or anything). They both seemed to need strong drinks, and while at least the latter, Dave, strays more towards beer (don’t hold it against him as he’s still quite rad), I figured neither would turn down having a drink that boasted a serious wallop of blended scotch with the edges slightly sanded by the stitch-sweet and herbally Carpano and the also-a-hint-cuddly-but-boastin -nutty-goodness-bitters named after them. Who, in their right mind, in Kansas or anywhere else would turn that down though? No-one in their right mind, that’s who.

A Note: Want your own cherry hazelnut bitters? Well, go on over to Price Family Farms and beg for the recipe.

A Second Note: Feel this absolutely has to have a garnish? Try a really good brandied or whiskied cherry if you can find one.