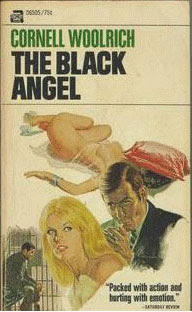 I have a fair amount of books by Cornell Woolrich (writer of Rear Window and many other memorable noir-y numbers, though criminally under-read and under-known today, and also a fella who had a not-very-peppy life, for being a big seller, to say the least), and go through phases where he’s a favorite – well, maybe he always is, but I have to be in the right mood, if that makes sense, or ready for the right mood. His books are very edge-of-your-seat in a way that’s all his own. Not the breakneck pace of some, not the catchy lines and characters of others, but his leads are always in a depressing, serious, jam of some sort (I’m underselling with “jam”), and slowly, with the tension every-increasing, trying to find a way out. Take The Black Angel. The lead lady has a husband, who’s been cheating and who is on death row for the death of his mistress, but our wonderful lead believe he’s innocent and so goes through a serious of super harrowing sort-of undercover escapades to try and find the real murderer – and it gets more nerve-wracking and ultimately depressing from there. But the atmospherics and language are all amazing. And there are some really good bar scenes, too, including the below, about cocktails and dating:

“There’s no good reason for getting stuck, really. It’s the simplest thing in the world. You see the thing through past the cocktails. I meant, a cocktail will get you through practically anything, anyway. If it’s the face that bothers you you’ve got an olive to look at instead. Then with the soup, you step outside a second to buy a pack of cigarettes. You pick some brand you’re dammed sure they won’t be able to bring to your table, in case there happens to be a ciggie girl in the place.”

Tags: a cocktail will get you through practically anything anyway, Cocktail Talk, cocktails, cocktails and dating, Cornell Woolrich, The Black Angel