I was recently flying into an airport (I don’t want to irritate said airport, so I’m resisting the urge to name, or to sound too complain-y), and not 25 minutes before landing, we were re-routed due to fog. It seemed strange – we were so close! But I figure the pilots and ATC folks know way, way better than I. And while I’m not really making a comparison, or saying I know better than anyone, really, but . . . you’ll let me now turn that little story into talking about the Black Fog, a drink that seems a little strange at first glance. But one which is darn tasty. Really! Trust me. 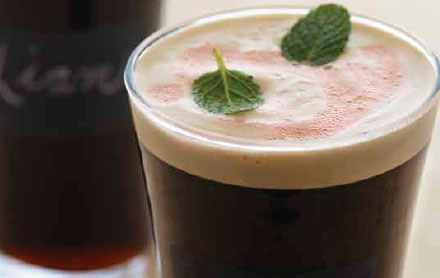 Black Fog, from Ginger Bliss and the Violet Fizz

One 12-ounce can Guinness stout
1 ounce framboise
1 or 2 mint leaves, for garnish

1. Fill a pint glass almost to the top with the Guinness.

2. Slowly pour the framboise into the glass, swirling it as you pour. Garnish with a mint leaf (or two, if you’re feeling it).

A Variation: Sometimes this is mixed using the French black raspberry liqueur Chambord, but I like the slightly stronger framboise (which is usually made from regular red raspberries and has a bit more kick).