Drinks on the Road: San Francisco, Part I

I’m getting ready for a little Wine Cocktails evening at bar Poco here in Seattle on Thursday (more about that later–but if you must know, it’s Thursday at 7 pm and you should be there), but wanted to take a second to look back at when I was out of this fair sunny city (no laughing on the “sunny;” it’s balmy and blue-skied here) a week ago, visiting various watering holes in San Francisco. And yes, I forgot to call pal Andrew, and am sad about it, but I’ll power through just to point out the hits to you, in two part fashion. The first part is all about the cocktail’d night that wife Nat and I hung out with drinker par excellente’ Camper English (who in the below pic is savoring a broccolini stem–tre’ international). 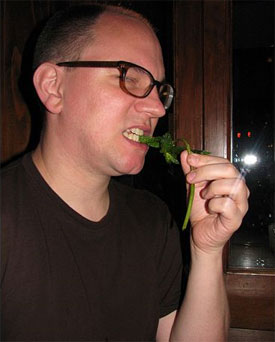 If you don’t know the legend of Camper English, he writes the educational (and yet still entertaining—it’s edutainment. And yes, you can hit me in the head for saying that word) blog Alcademics, which is all about the cocktails, the bartending, and the booze. He also used to write Camper’s Hate Blog (which is genius, and worth going back through), and lots of other stuff (you can really learn more than you probably want at Cramper.com). He’s funny. And knows the San Francisco cocktail bars like few others. He suggested we meet at the new-ish Rickhouse, which luckily was near our hotel in the financial area, as we went there straight off the plane after checking in. The Rickhouse has a heavenly cocktail list with lots of information and drinks (sadly the actual menu was a bit too nice to steal, though we were tempted, being recidivist in our menu-stealing ways), a barrel stave ceiling (with barrel hoop lights), and a table right near the front window that we hooked. For the first round I had a Rye Maple Fizz, cause I was feeling rye-y and a drink with maple syrup hooks me like a trout on corn, Mr. English had a Laphroig Project (he’s a smoky essence enthusiast–check for this drink’s recipe here), and Nat had a Bella Fragollo, which was Italian-y goodness. 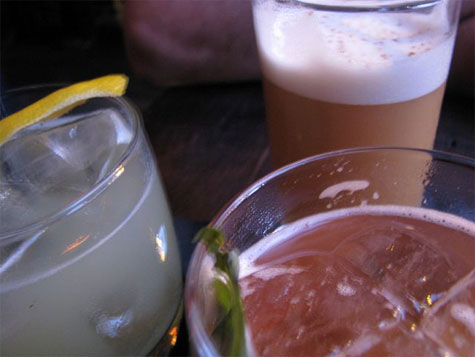 All the drinks we had there were expertly made right in front of me by the talented staff as I gazed at the immense wall of booze. Seriously (and easily believed, as they’re a sibling of the top notch liquor store Cask, so they have an “in” to booze-shelf-stocking), they have a 15-or-20-foot wall of bottles behind the bar. I went into a trance, and when I woke up I had a drink in my hand, a smile on my face, and a little slobber on the smile. Which sounds much grosser than it was.

After another round, we realized that if we didn’t eat we’d fall over (which would have bored Camper and not done much for our reps), so we went (on his suggestion–he’s a “vegetalian,” too, so finding an eating spot for all and sundry was a snap. Oh, a “vegetalian” as I found out is a cocktail-swilling vegetarian. Don’t smirk) to Beretta, in the Mission district. Baretta was, as the kids say, the stuff (well, except for our first bartender, who seemed to wearing my grandmother’s velour curtains. The second bartender was a dream, though). Waiting for our table I sipped (or gulped) an Angelina that demonstrated the bar’s grasp of balancing perfectly a few key ingredients (a sweet skill to have): Partida Anejo tequila, Carpano Antica, and Benedictine. Tasty indeed, with the tequila mingling with the other two’s herbal natures in an unexpectedly complenting manner. Nat had a Agricole Mule (rum, lime, ginger, mint, and pic’d below), and Camper had a Single Village Fix with Del Maguey Mezcal (that smoky thing again), lime, and pineapple gomme. All deliciousness, and matched in their heights by our eventual dinner, which consisted of a couple thinly Italian pizzas, some broccolini (re: Camper pic above), and some unbelievably good bruschetta topped with fava bean and pecorino puree. This thick-crisped-bread-topped-with-a-smooth-but-with-a-few-chunks spread lushed up the mouth. So good we ordered it twice. I kid you not. Let me repeat for effect: I kid you not. We had more good cocktails there and then, too, and lots of Camper talk, and finally tumbled into a cab in the best way: fat and drunkish. Thanks Camper, thanks S.F., and thank you, too (and watch for S.F. post number II soon). 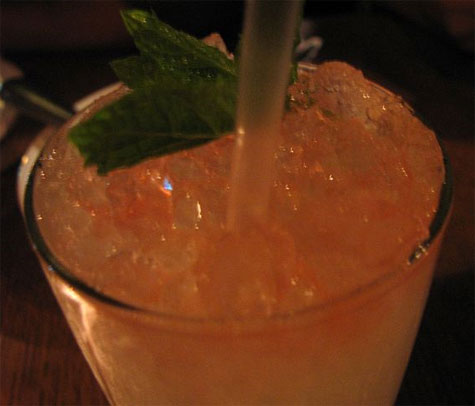