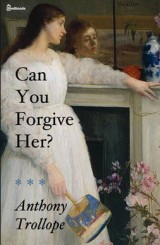 Cocktail Talk: Can You Forgive Her

Anthony Trollop and I hang out, usually over some port. It’s a swell time, and as a long-time reader of this blog (which you are, right? Right?), you probable already know this, cause of past Trollope Cocktail Talks (which I know you’ve read, right? Right?), and my general fawning over him. I recently just re-read the first of the awesome Palliser novels, a book called Can You Forgive Her. Not the tops of that series of his (to me, the Phineas books are best), but still amazingly good. And it has this quote, which tells about how a good whiskey drink is a swell mood-changer.

And when he got to his club the waiters found him quite unmanageable about his dinner, which he ate alone, rejecting all proposition of companionship. But later in the evening he regained his composure over a glass of whiskey-toddy and a cigar. “She’s got her own money,” he said to himself, “and what does it matter? I don’t suppose she’ll marry her cousin. I don’t think she’s fool enough for that. And after all she’ll probably make it up again with John Grey.” And in this way he determined that he might let this annoyance run off him, and that he need not as a father take the trouble of any interference.

–Can You Forgive Her, Anthony Trollope

Tags: a good whiskey drink is a swell mood-change, Anthony Trollope, Can You Forgive Her, Cocktail Talk, whiskey toddy