Yeah, that’s right, we’re going back-to-back with the first two episodes of the new season of the Cocktail to Cocktail Hour (which is good, in a way, cause who really knows when the next one will be?). Partially we’re doing this because I love you so, so very much. And partially because Episode 2 is a very special holiday cocktail, and, well, the holidays are certainly in full swing. The bubbly combo in question is the Tip Top, a sparkling wine-brandy-Benedictine affair from Dark Spirits that’ll make any winter holiday you care to celebrate better than you could ever imagine (especially New Year’s Eve naturally). So get with the holiday spirit why dontcha?

The time is now! This is the time! This time it is time for the time being now! All of which is to say, the sparkling new season of A.J. Rathbun’s Cocktail to Cocktail Hour (starring me, A.J. Rathbun) starts today. And what a start it is: in this first episode I’ll teach you how to make the Supersonic cocktail, named after my favorite NBA team of all time, The Seattle Supersonics. Yeah! It’s a delicious mix, which should be enough to woo you to watching and making, but to make things even more exciting, the episode has a very special guest: the Glove, the best defensive point guard in history, Gary Payton! You have to watch it to believe it folks. So what are you waiting for – hit play already!

PS: As always, the Cocktail to Cocktail Hour was directed, co-wrote, edited, produced, and gaff’d by Dr. Gonzo and is an Artificial Khaos production.

Cocktail to Cocktail Hour V2, Episode Two, They Shall Inherit the Earth

In the second smashing episode of the new season of the Cocktail to Cocktail Hour (hey, didja somehow miss the first episode with poet Ed Skoog and the Ellipse cocktail? They watch it now) I my-own-self take the stage in the Cocktail to Cocktail studios to make a brandy-Benedictine-Cointreau-lemon drink called They Shall Inherit the Earth. It was originally created by Morley Callaghan, a Canadian writer from years past. Oh, and there’s singing. And more singing by some shady folks who stopped in the studio. Curious? Watch it for gosh sakes. 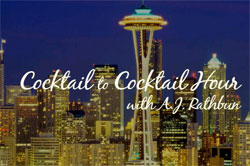