If I could, through the wonders of wondrous science (c’mon science, I’m buttering you up, make this happen) either go back in time to have a drink with Mr. Charles Dickens, or go miraculously into the universe of a Dickens’ book, well, I’d be tickled. Sure, sure, I wouldn’t want to go forever (I mean, Sookie and Rory wouldn’t be around, for one. And Dr. Strange wasn’t even a thought yet), but the pub and bar scenes he relates, and his evident adoration for certain drinks, call out to me in a slightly slurred voices. And if I had to choose which of the many watering holes from the many Dickens’ books? Well, I’m not sure, but the Six Jolly Fellowship Porters from the great book Our Mutual Friend would definitely be in the running, if not running away with my vote and me. Wonder why? Read the below quote why dontcha.

The bar of the Six Jolly Fellowship Porters was a bar to soften the human breast. The available space in it was not much larger than a hackney-coach; but no one could have wished the bar bigger, that space was so girt in by corpulent little casks, and by cordial-bottles radiant with fictitious grapes in bunches, and by lemons in nets, and by biscuits in baskets, and by the polite beer-pulls that made low bows when customers were served with beer, and by the cheese in a snug corner, and by the landlady’s own small table in a snugger corner near the fire, with the cloth everlastingly laid. This haven was divided from the rough world by a glass partition and a half-door, with a leaden sill upon it for the convenience of resting your liquor; but, over this half-door the bar’s snugness so gushed forth that, albeit customers drank there standing, in a dark and draughty passage where they were shouldered by other customers passing in and out, they always appeared to drink under an enchanting delusion that they were in the bar itself.

For the rest, both the tap and parlour of the Six Jolly Fellowship Porters gave upon the river, and had red curtains matching the noses of the regular customers, and were provided with comfortable fireside tin utensils, like models of sugar-loaf hats, made in that shape that they might, with their pointed ends, seek out for themselves glowing nooks in the depths of the red coals, when they mulled your ale, or heated for you those delectable drinks, Purl, Flip, and Dog’s Nose. The first of these humming compounds was a speciality of the Porters, which, through an inscription on its door-posts, gently appealed to your feelings as, ‘The Early Purl House’. For, it would seem that Purl must always be taken early; though whether for any more distinctly stomachic reason than that, as the early bird catches the worm, so the early purl catches the customer, cannot here be resolved. It only remains to add that in the handle of the flat iron, and opposite the bar, was a very little room like a three-cornered hat, into which no direct ray of sun, moon, or star, ever penetrated, but which was superstitiously regarded as a sanctuary replete with comfort and retirement by gaslight, and on the door of which was therefore painted its alluring name: Cosy.

Dickens and the Dog’s Nose 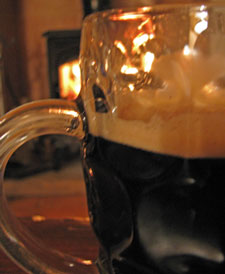 If you’ve read this blog longer than, well, last week, or have read any of my books, you probably know that I dig Dickens (Charles, that is. I don’t like Pudgie Dickens at all). I’ve had a quote or two on here from his books, and probably have rambled enough that if he were here, he’d say “shut yr yap Rathbun.” Or, he’d buy me a drink. I like Dickens so much that I even have posts about his up on other worthy blogs—well, at least one. See, I recently wrote about have drinks with Dickens on Michael Green’s blog. Head on over to learn more about drinks in Dickens time, why you should be toasting him, and how to make a few drinks mentioned in his book: the Dog’s Nose (pictured left) and the Purl. So, head on over and get your Dickens on.