This is (and I’m being both tongue-in-cheek and deadly, deadly, serious here) a nutty drink. Really, I’m not 100% sure how I came up with it, as the ingredient list is wide-ranging and may appear to be one that would only turn up in the ramblings of a drink-making madman. A madman, I tell you! Wait . . .

Anyway, the recipe’s printed in Ginger Bliss and the Violet Fizz, and, strange-ish ingredient list aside, it’s darn good. A great drink for a Friday, really, especially if you’re getting ready to go on a world tour, or want to pretend to take a world tour from your living room or home bar. If you can’t find the Kahana Royale macadamia nut liqueur, well, I feel for you. But you could sub in another nutty liqueur – then email me and tell me how it is. If you can’t find Amaro CioCiaro, dang, I’d move. But if that isn’t feasible, try another of the amaros, one that leans towards the bitter side. If you can’t find Fee Brothers Whiskey Barrel Aged Bitters, then just go read another blog. Sorry. 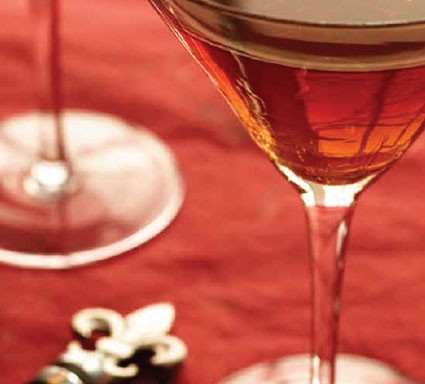