What I’m Drinking: Shine Along the Shore

It’s June, and you know what that means, don’t you? Time to bust out those short shorts (hopefully not too short – you know, those don’t really fit anymore, or at least not in a way that’s as flattering as they once were, though admittedly they once were very flattering) and have this drink. It’s not one of those ultra-freshers, which are really rather refreshing, but sometimes feel a little, oh, you know. But this one still has its place within the annals of sunshine days and daydreams, and especially when accompanying the more remote beaches. Where, I’ll admit, you can probably get away with those short shorts and, I suppose, even less. 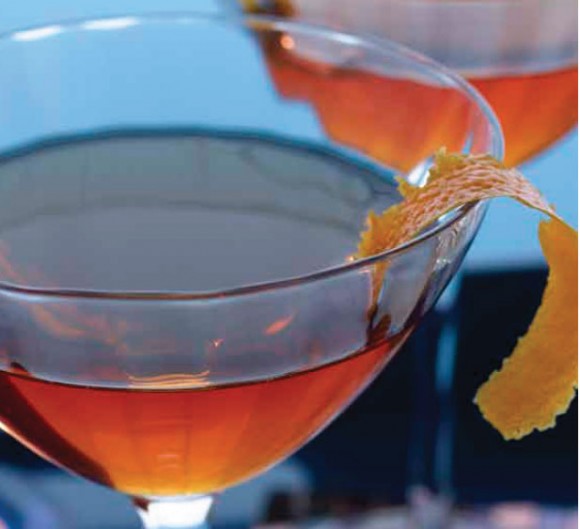 Shine Along the Shore

2. Strain into a cocktail glass. Twist the twist over the glass and drop it in.

So, you know about 11:11, right? Magic number? All that? Here’s what the reliable (depending on your source) Wikipedia says to kick things off:

Numerologists believe that events linked to the time 11:11 appear more often than can be explained by chance or coincidence. This belief is related to the concept of synchronicity. Some authors claim that seeing 11:11 on a clock is an auspicious sign. Others claim that 11:11 signals a spirit presence. The belief that the time 11:11 has mystical powers has been adopted by believers in New Age philosophies.

I may believe all of that. Well, who knows. I may be kidding, too. I remember that – or think I do – my old pal Jon was the first to tell me about 11:11 being something you wish on when you see it randomly on the clock. Though it could have been an ancient spirit posing as Jon? Maybe. But I’ve spent many years making wishes in this situation, and now, today, it’s actually 11-11 on the calendar, so I’m going to drink a Three Wishes cocktail at exactly 11:11 today (both in the morning and at night, to be safe), and make some wishes. Wish me luck! Oh, you can do the same – I’m happy to share wishes. 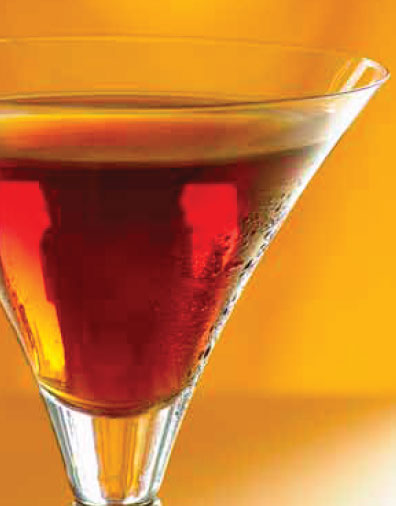 1. Fill a cocktail shaker or mixing glass halfway full with cracked ice. Add the rum, Creole Shrubb, and amaretto. Stir – no wishing yet.

2. Strain into a cocktail glass. Drink. Let the wishing begin.

What I’m Drinking: The W&A

Hey, happy 2016! Sorry there have been few posts for the last few weeks, but I went to Italy for the holidays and wasn’t able to post due to having wine in each hand. Well, wine, pizza, cheese, and grappa. And amari. And Negronis. And pasta forks. You get it! But now I’m back with a swell and simple drink for your Friday. So easy. So delicious. Just like one wants early in January. It has two key ingredients: Woodinville Whiskey Co’s new bourbon and amaretto. If you need to use another bourbon, well, I feel sorry for you. On the amaretto, I used my homemade version (recipe below), and if you can’t use that, well, I feel sorry for you again. But it would still be a good drink I think, even with slightly different ingredients. Try it! And let me know. 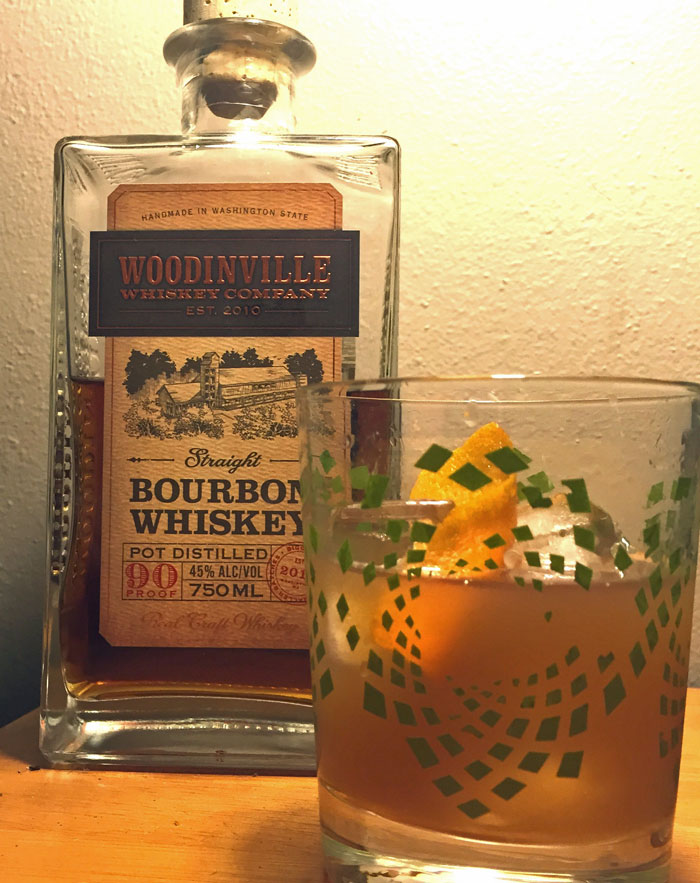 1. Add a few good-sized nice ice cubes to an Old Fashioned or comparable glass. Then add the bourbon. Then the amaretto. Stir well.

2. Garnish with that orange twist. Enjoy the New Year.

A Note: To make An Enticing Amaretto (from Luscious Liqueurs) follow this recipe:

1. Using a chef’s knife, roughly cut the almonds into smallish pieces. Add them, the orange zest, and the brandy to a large glass container, one with a secure lid. Stir well. Place the container in a cool, safe, place, away from the sun. Let sit for two weeks, swirling occasionally.

2. Add the sugars and the water to the medium-sized saucepan. Stirring occasionally, bring the mixture to a boil over a medium-high heat. Lower the heat a bit, keeping the mixture at a low boil for five minutes. Turn off the heat, and let the syrup completely cool in the pan. This step can be done anytime during the two weeks mentioned in step 1, as long as the syrup is refrigerated until it’s added to the liqueur.

3. Add the syrup made in step 2 and the vanilla to your secure container. Stir well. Place the container back in a cool, safe, place, away from the sun. Let sit for two more weeks, swirling at least every other day.

4. After the final two weeks, carefully strain the mix through double sheets of cheesecloth into a pitcher or other container, one that you can easily pour out of–there’s no need to spill.

5. Next, get two new sheets of cheesecloth, and strain the amaretto into bottles or jars with good lids–or one larger container. Serve either chilled or at room temperature, depending on your mood and inclination.

What I’m Drinking: Over the Kent Moon 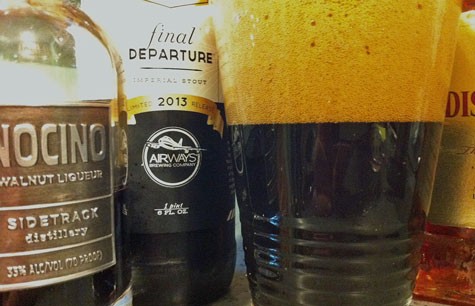 Over the Kent Moon

1. Add the Nocino and the amaretto to a chilled Collins glass.
2. Slowly, and with a steady hand, add the stout. Stir briefly and calmly.

Recently, I had a query about a drink featured in my book Good Spirits, a drink called the Lily. As Good Spirits is from a few years back (but not old by any means, and still I hope darn fun and useful), I hadn’t actually made the Lily in awhile, and so was pretty excited to revisit the drink. The question came around the use of crème de noyaux, an almondy liqueur made from apricot pits, and an ingredient not as readily available – it also has a signature pinkish color. The drink-maker was having a hard time tracking it down, and wondered about subbing. My first thought was amaretto, also made usually with apricot pits or almonds. So, for fun, I tried making the Lily with both. And you know what? Both versions were darn tasty. The main difference really was the color, which is wildly different (the noyaux is the pink one naturally in the pic), but the flavor was very similar, with the crème de noyaux version a smidge sweeter, and the amaretto nuttier on the back end. I suggest you try both, and see what you think. 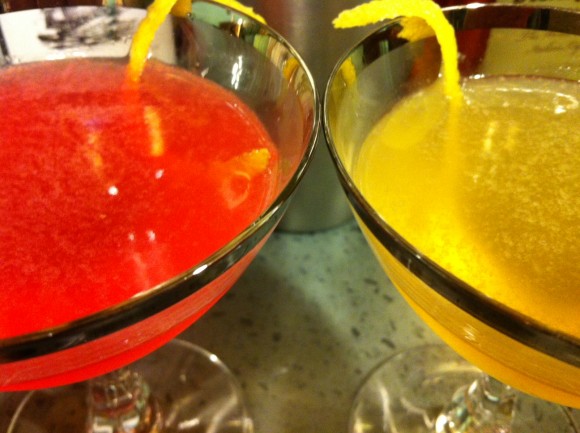 2. Strain into a cocktail glass. Garnish with the lemon twist after twisting it over the drink.

2. Strain into a cocktail glass. Garnish with the lemon twist after twisting it over the drink.

What I’m Drinking: Shine Along the Shore 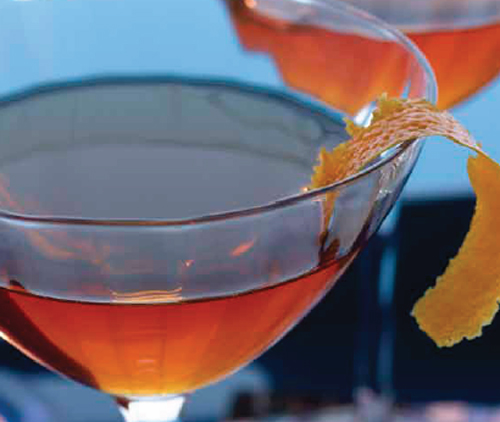 Poor amaretto. So many folks these days consider it a boozy beverage drunk by college students during the hours when they (and when I, back then, between us) have more drinks than brains. But listen up: this isn’t the case. The dandy-est amaretto is something that Italians savor and so should you. It’s a treat, if you don’t mind finding brands like Gozio, Luxardo, and Disaronno, amarettos that have been made with a sense of taste and care and ingredients that are real and not chemistry experiments. The end result should be a deep almond flavor (which comes from apricot or peach pits, usually) and not overly sugary.

And while we’re dolling out pity party invites: poor summer. It’s far out the rear window now, and you’ve probably forgotten all about those days of sun and cut-offs (though a nice fall sunny day is savorable much like the good amarettos mentioned above). This drink will remind you, for a few sips at least, of those shore-bound summer day and help re-introduce amaretto as needed. The recipe’s from Ginger Bliss and the Violet Fizz, if you wondered.

2. Strain into a cocktail glass. Twist the twist over the glass and drop it in.

A Note: I like a pretty wide twist here, so don’t fear following the same route. 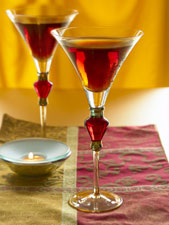