Editor’s Note: In this episode of Drew’s Brews, Drew visits the windy city and blows right into a brewery. Who would have guessed that would happen? 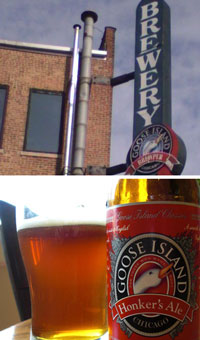 When thinking of the mid-west beer culture, usually the first thought is of gallons of mass produced lager being guzzled in losing efforts at Cubs games. I wasn’t aware of any craft breweries when I planned my inaugural visit to CHI Town, so I decided to do some research. My buddy from college was getting married and luckily has good taste in beer; the rehearsal dinner and meet up were planned in a brewery (I knew we were friends for a reason). He took us to Goose Island Brewery in the heart of downtown Chicago. The mission this company was built on is the idea that changing what the mid-west drank would require the patron to be a part of the experience. Opened in 1988, the concept was for the people to see the process to gain an appreciation for it and grow their palate in the process–and it worked. Goose Island cranks out some serious beers: in addition to their standards and seasonals they offer a vintage collection, sours, and bourbon-aged beers.  They have blown up in Chicago and the demand is great; they’ve just opened a second location right next to Wrigley Field. I tasted the gauntlet of what they had to offer and enjoyed them all. At the end of the night, to answer the Spiked Punch age old question, Honkers is what I’m drinking. This is Goose Island’s take on English style ale. Somewhere between an ESB and an Amber you find some nice Honkers. Pours a rusty copper with a thick beige head resting on top.  Scents of warm fresh bread, some mild hops, and a bit of a tart citrus twang. The body is crisp with a moderate carbonation backing, but still retains a smooth, creamy feel.  Nice bitter backing from a good hop presence–overall, a very balanced beer. This is my style of beer CHI Town, well done. I wish I had access to this locally. With the low ABV, I could see this being a regular in my house.