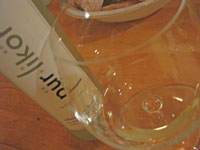 Washington State, historically, hasn’t been known for its relaxed liquor laws or an immense selection in its liquor stores (just the opposite, and mainly because all the liquor stores are state owned, thereby killing competition and any free market system. Freakin’ commies). But lately, this arid situation has started to change, with more intriguing brands and spirits and such appearing on shelves, and more local products being distilled, stilled, made, imported, and distributed. Recently, I was able to share a sweet evening with the fine folks at Pür Spirits (those fine folks being Kiki, Harvey, and Olli), who fall into the “importing” category of that last sentence, and who are helping to put Washington on the cocktail enthusiast’s travel itinerary.

Pür Spirits consists of a line of liqueurs and base spirits (more or less) imported from Germany. As they say on the site (which I’m copying in so I don’t get it wrong):

Each variety of Pür Spirits is produced according to traditional principles by a 3rd generation artisan distiller in a remote village in southern Germany. Our time-honored recipes have been passed down and refined over decades, if not centuries.

Now, that’s what I tend to like (tradition, family, refinement, and lots of booze). The line up as it is today (though I was lucky enough to taste some other possible additions, including a dandy winter liqueur that was orangey and herbally) includes two Pür Likörs: Blossom (an elderflower liqueur that is rich with floral and spring-in-the-forest overtones), Williams (a pear liqueur that has a fine pear flavor and goes light—thankfully—on the sweet), and three Pür Geists: Framboise (which is called a raspberry-flavored vodka, but which is better than other bottles claiming that title), Sloe (which is a sloe-berry flavored vodka, in name, but a sloe-berry gin in reality, because it has a much more interesting taste than a  normal flavored vodka), and Bierbrand, a distillation of beer aged in a chestnut cask. If that last one doesn’t intrigue you, you should stick to drinking water. Here’s the whole family: 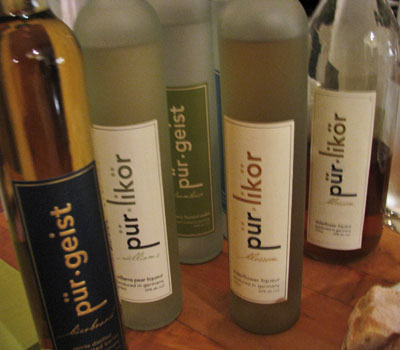 Currently, the Pür Spirits line is only available in Washington State (expansion plans are in the planning stages, but since they only hit the market last November, we get to have bragging rights for a bit). Which means you should come out here right away and try them all, then buy some and take them back to wherever you’re from. Many of the top local drinking holes are serving them up and mixing them up in strange and beautiful ways, too. Oh, and beyond lighting up the palate (meaning: they taste delish), the bottle design is graceful and artistic, making them dandy presents. Just check out the Bierbrand close up: 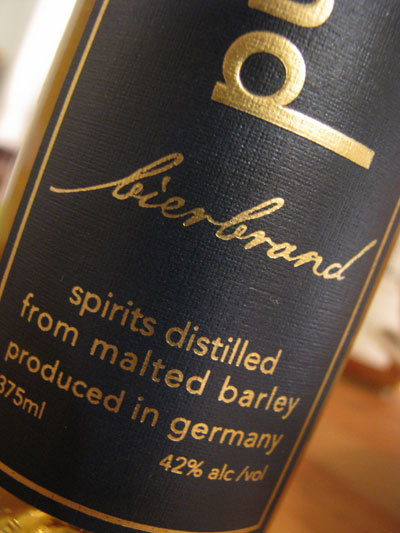 Pretty, isn’t it? So, come to WA and find your way to Pür-ity (did I really only make two “Pür” puns? That’s weak. Forgive me).

PS: Wait, you say you already live here? Then aren’t you lucky–you just need to find your way to a liquor store or bar. Right now!