What I’m Drinking: The Gleanbrier

Summer seems somehow a swell season for sherry drinks. Lighter, refreshing, sherry won’t weigh you down when the Mercury’s risen. And the Greenbrier (which isn’t the cocktail below, by the by) is one of a handful of elder sherry drinks, in that it shows up in a number of older classic cocktail tomes. It’s a fairly tasty mix, too, with dry vermouth, sherry (duh), and, interestingly, peach bitters, oh, and mint, too. Very summery, right? But for some reason I wanted to try a twist (probably because my dry vermouth and blanc vermouth bottles are right next to each other) on the formula, and changed the vermouth from dry to blanc. Super, duper, choice, if I can be so bold. A tiny bit brighter, and bit, oh, rounder in a way, due to the sweeter (but not sweet) nature of the blanc. Lovely. Do it.

Of course, before the super-duper-ing, you gotta pick the right sherry. I went with Tio Pepe Fino sherry (which, lucky me, arrived in the mail). Fino sherries are lowish in alcohol, light, crisp, and meant to be served cool and kept cool (and best to consume fairly soon after opening, like a light white wine). Tio Pepe’s version is made from the Palomino grape, and is nice and dry with a golden color and a little nutty-ness. It mingles here with the blanc vermouth as if they were cousins (hmm, I suppose they are, in a way), as well as playing nice with the bitters and mingling on the nose with the mint. A swell summer sipper indeed. 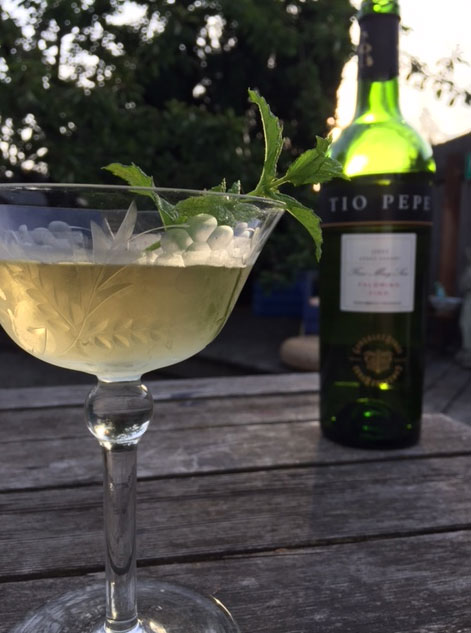 1. Fill a cocktail shaker or mixing glass halfway full with cracked ice. Add everything but the mint. Stir well.

2. Strain into a cocktail glass and garnish with that mint.