“But you won’t enjoy it. Wait.” Kiernan put his glass on the bar and marched to the door on the left and on out. In five seconds, he was back, with a bottle in his hand, and as he rejoined us and asked Santa Claus for a glass I saw the Pernod label. He pulled the cork, which had been pulled before, filled the glass halfway, and held it out to Bottweill. “There,” he said. “That will make it unanimous.”

“Thanks Al,” Bottweill took it. “My secret public vice.” 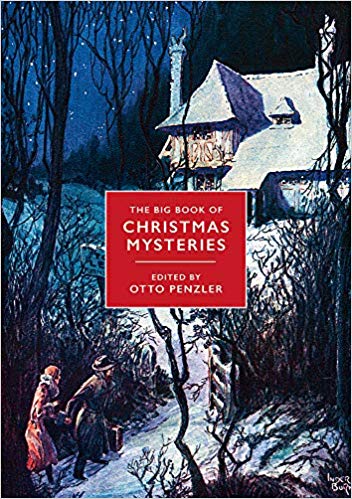 When you’re sorta, oh, staying at home for an extended period as some are at the moment, it’s good to have a big, big book (or many). If you’re looking for a good big, big book, may I suggest what I’m reading, The Big Book of Christmas Mysteries? Cause it is very big (700 plus pages in the version I have), and very good (I mean, it features tons of heavy-hitters covering many genres), and very holiday-y, which brings a nice feeling these days. Christmas and winter holidays are mystery-story hotspots, if you didn’t know, probably due to balancing the cheer out with murder. That’s a guess, but I’m just happy there are so many good stories here! Including one by Robert Barnard called Boxing Unclever. I have to admit, I didn’t know Mr. Barnard well before this story (I know, I probably should!), but one of the fun things about a big anthology like this is discovering the writers new to you, alongside your favorites. And this story is an intriguing one, a story within a story, and one with some nice – and murderous! – cocktail-talking, in the form of the below quote:

And so it was time for a second round of drinks. I decided on that as I saw toiling up the drive the figure of my dear old dresser, Jack Roden. My once dear old dresser. I poured out a variety of drinks including some already-mixed cocktails, two kinds of sherry, some gins and tonic, and two glasses of neat whisky. There was only one person in the room with the appalling taste to drink neat whisky before luncheon. Pouring two glasses gave that person a fifty-fifty chance of survival. Depending on how the tray was presented. With my back to the guests I dropped the hyoscine into one of the whisky glasses.