Paul Clarke’s The Cocktail Chronicles Is Out – And You Should Get It! 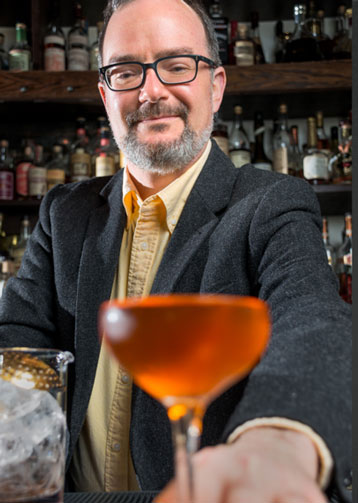 Paul Clarke is a swell guy. I once compared him to an Anthony Trollope quote and he never complained (it was quite a good quote!). He writes a blog, and has since time began, more or less, called The Cocktail Chronicles, which I read a lot, but was always too shy to comment on – and he still says “hello” when I see him at local Seattle bars. He also is now editor-at-large for the insightfully-tipsy Imbibe, and has written for most of the good mags, online and off. Through all that, he’s been a witty, learned (in the best ways, like, say Dr. Johnson, but with drinks instead of dictionaries), educating, tasteful, and bespectacled voice throughout the cocktail resurgence and renaissance. And now he has a book! It’s called The Cocktail Chronicles (which is logical, as it feels a very thorough extension, in a way, of the blog): Navigating The Cocktail Renaissance with Jigger, Shaker, and Glass, and it’s darn good. It has enough history-of-booze-and-drinks to satisfy the history buffs, and enough humor to satisfy the humor buffs. And enough drinks for a whole year’s worth of parties, and then a few more on top.

If you, like me, are a home bartender who actually, you know, likes to read, you’ll love this, and find much to make your evenings more enjoyable. If you’re a pro bartender, then, well, I consider you a failure of sorts if you don’t devour this book as part of your professional education (oh, buy one of mine, too, cause I need new shoes). If you can’t tell, I think it’s a darn fine book. And I didn’t even mentioned the design, which has a certain 1920s style all its own, with fine drawings and layouts and balance as opposed to over-wrought stylized foodie shots. Which is refreshing.

Not sold? Hmm, maybe you should read the below excerpt, a drink recipe for the Blood and Sand. You’ll understand my enthusiasm once you do, trust me.

The below is from Paul Clarke’s The Cocktail Chronicles: Navigating The Cocktail Renaissance with Jigger, Shaker, and Glass

BLOOD AND SAND
Spoiler alert: the recipe includes neither.

Some legacies deserve permanence, while others could use a little cleanup.

On the permanence side there’s Rudolf Valentino, the actor who, in 1922, starred as an ill–fated matador in Blood and Sand. In 1926, just a few years before the advent of talkies would destroy the careers of many of his co- stars, Valentino shared that Blood and Sand was his favorite of his films; a few days later, he was dead from peritonitis, leaving only the legacy of a dashingly handsome star who would never age, and whose voice would never be heard.

The Blood and Sand cocktail, however, has a less–illustrious legacy. Its print debut was in 1930 as an equal–parts recipe in the Savoy Cocktail Book, but following its revival during the cocktail renaissance, the Blood and Sand began to suffer from its own imperfections. Fact of the matter, the Savoy’s Blood and Sand just isn’t all that great. Oh, it can be nice when made well, but “nice” isn’t the same thing as “holy hell, that’s scrumptious.”

But craft bartenders like to tinker, and many have taken a crack at the Blood and Sand’s formula. Some boost the whisky’s profile by increasing its volume in the drink as well as by utilizing smokier, burlier styles. Others tweak the orange juice’s insipid contribution, either swapping in the juice of blood oranges or adding lemon to the mix; and others just chuck three of the ingredients down the sink and drink the whisky on its own without all the fanfare.

Nothing against straight Scotch, but the Blood and Sand’s legacy is one worth preserving. Tip one to Valentino, and don’t view the recipe specs with anything resembling rigidity.

Tips: Give the whisky’s power a jolt by bumping the Scotch to 11/2 oz.  and dropping everything else to 3/4 oz., or keep the above proportions and instead swap a blended malt like Great King Street or a single malt like Highland Park 12 for the blended Scotch. You can also add a teaspoon of lemon juice to give it a little more pep, or substitute blood–orange juice for the OJ. And if you put a slice of orange in the shaker before mixing, it’ll give the cocktail an added—and welcome—dimension.