First it was Luke below, passed out after a night with Good Spirits. Now it’s Bunnie (the kitten of rockin’-pals-and-blog-readin’-stalwarts Nicole and Jon), hitting the bottles once the parents had passed out from too many Valencias (word was that Bunnie was sipping the High Life first, then moved on to the Bud). What feline is next to take a turn into boozing? You tell me. And, for that matter, aren’t there any drinking dogs out there? Dogs are going to get a bad name soon, stuck in line at the bar behind all these cats. And what about drinking lamas? Pet ocelots stealing into the scotch? Don’t get me started on the helper monkeys and gin. Cause that action’s rampant. 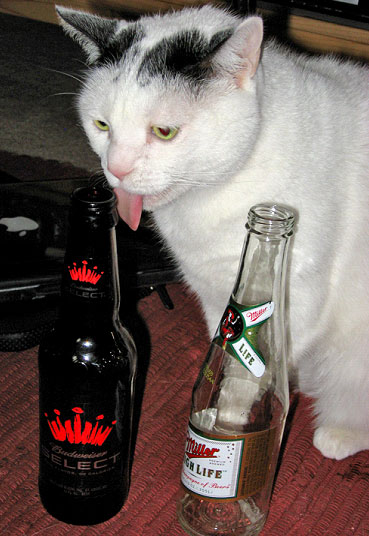