Farmer’s is not, sadly, a new Seattle hotspot serving Fish House Punch (that classic punch from Philly via the Schuylkill Fishing Company sometime in the 1700s). It is, however, my pal Shane Farmer’s house, where he recently when punch crazy for his house-warming/birthday bash, purchasing two punch bowls (yes, I said two) for the occasion so he could serve not only this mix but the delightful Don’t Just Stand There (a recipe for which can be found in Good Spirits). Now that, friends, is a fella that knows how to throw a party. If you ever run into him at the bar (any bar, that is) I’d go about picking his brain for party tips (not literally “picking his brain” by the way, if there were any mad scientists thinking they’d actually pry open his skull for said tips. Just ask him why dontcha?). This recipe’s from Dark Spirits, by the way. And this photo was taken at the actual referenced Shane Farmer party above, by the way: 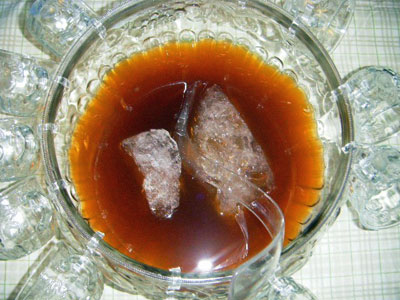 Block of ice (or cracked ice, if necessary)

1. Add the ice to a punch bowl (fill about three quarters full if using cracked ice, and feel free to crack the block a bit if needed). Add the rum, cognac, brandy, juice, and syrup. Stir 10 times, while humming fishy songs or hymns to Pennsylvania.